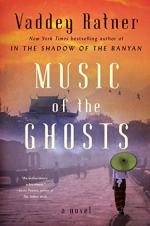 Related Topics
In the Shadow of the Banyan: A Novel

Vaddey Ratner
This Study Guide consists of approximately 71 pages of chapter summaries, quotes, character analysis, themes, and more - everything you need to sharpen your knowledge of Music of the Ghosts.

Music of the Ghosts Summary & Study Guide includes comprehensive information and analysis to help you understand the book. This study guide contains the following sections:

This detailed literature summary also contains Quotes and a Free Quiz on Music of the Ghosts by Vaddey Ratner.

The following version was used to make this guide: Ratner, Vaddey. Music of the Ghosts. New York: Touchstone, 2017. The novel is broken into four sections - Prelude, First Movement, Second Movement, and Third Movement. Within each of those sections Ratner changes perspective from different characters in mini chapters that are unnumbered, but broken by a page.

The “Prelude” begins with Suteera in a rice field, trying to sleep next to her Aunt Amara. She thinks about her dead brother and mother, and her long gone father. They are sleeping until they can escape Cambodia to get to Thailand. The prelude ends with a soldier telling Suteera not to worry, “Out here . . . There’s only the music of the ghosts” (4).

The First Movement starts on page 5, with the Old Musician thinking about the woman he has written, the daughter of a man he knew. Meanwhile, Suteera is on a plane to Cambodia, with other refugees who are returning home for the first time. Her aunt has died, and she is returning to Cambodia to bring Amara’s ashes. As she meets these other Cambodian-born Americans, she thinks about what home means to her. The Old Musician, meanwhile, is at the temple and considering his past, how he spent time in America, and how he got the temple at which he now resides. The abbot comes to him to ask him to play his lute for a boy with a drug addiction, whose parents have asked for help. Suteera’s plane lands in Phnom Penh and she grapples with the poverty she witnesses while Mr. Chum drives her through the busy streets.

The second half of the First Movement start on page 54. Teera tries to visit the temple, and both the Old Musician and Dr. Narunn see her there, but she flees when she sees her father’s name enshrined. The ceremony for the drug addicted boy begins, and Dr. Narunn chants while the Old Musician plays the lute. Teera, back in her hotel, thinks about her eighth birthday when her father had written her a smoat, and then disappeared. The war started soon after that, as did the strife between her family. The Old Musician, formerly called Tun, still in the midst of the ceremony, begins to think about his education and specifically one teacher whom he later learned became Pol Pot. The First Movement ends with a two-page poem titled “Interlude.” Though not stated explicitly, the reader can assume Teera wrote it.

The Second Movement starts on page 103. Teera finally goes to Wat Nagara and meets the Old Musician. She tells him that she hopes the truth of what happened to her father did not die with him. The Old Musician thinks about his past, and running into Channara and Suteera when Suteera was three. Soon after he adopted his daughter Sita, a young girl who survived a bombing but her mother did not. Teera gives Dr. Narunn a ride home, and they soon become lovers. Teera confesses to him that she does not know where home is any longer, and Dr. Narunn begins to tell her his own complicated past.

The second third of the Second Movement starts on page 147. The Old Musician remembers his past, as Tun, and leaving his daughter for the war, hoping to build a better Cambodia. Dr. Narunn, meanwhile, tells Suteera his story of coming to Phnom Penh. His mother died in childbirth, and he decided to pursue medicine. At the monastery, two monks find a gun in the river and the Old Musician brings it to the abbot. The abbot tells him a little girl has come to the monastery for safekeeping.

The last third of the Second Movement starts on page 191. Suteera walks around Phnom Penh with Dr. Narunn, meanwhile the Old Musician thinks back on his first experiences as a soldier. Suteera and Dr. Narunn travel to a small village, and Dr. Narunn gets a call from the monastery - the abbot asking him and Teera to take the orphan girl, Lah, for a few days. They agree, though Suteera feels worried. The Old Musician thinks about how he was forced to stay in a hut alone for a month when he first started as a soldier. Later he remembers he came back to Phnom Penh to try to rescue his daughter and nanny, but his nanny had been shot. He wonders how he will ever tell Suteera, “I am your father’s executioner” (236).

The third movement starts on page 239, as Teera picks up Lah to visit an animal sanctuary. Meanwhile, the Old Musician remembers his days of torture in Slak Daek with Suteera’s father. Aung Sokhon was someone he had named and he feels guilty. In prison, after many rounds of torture, Sokhon makes Tun promise that he will not let him die from torture but instead will kill him in the event he will die anyway. Suteera meanwhile, is loving her time with Dr. Narunn and Lah, and they travel to Siem Reap together - becoming what feels like a family.

The second half of the Third Movement starts with Tun’s perspective as his torturer’s bludgeon his face and eye. One soldier takes pity on him and gives him a blade, assuming it will be used for suicide. Teera goes to meet the Old Musician at the temple, and he agrees to tell her the story of her father. He tells her about his torture, and how finally he had no choice but to carry out her father’s wishes, and he kills him with the blade. A few weeks later, the prison was liberated. Tun found Sokhon’s instruments, and struggled to forgive himself. Back in the present, Teera decides to stay in Cambodia indefinitely, with Lah and Dr. Narunn. She talks to the Old Musician about forgiveness. She donates her father’s instruments to an ensemble of landmine survivors. The novel ends with the Old Musician singing Sokhon’s smoat that he wrote for Suteera.

More summaries and resources for teaching or studying Music of the Ghosts.

Music of the Ghosts from BookRags. (c)2022 BookRags, Inc. All rights reserved.