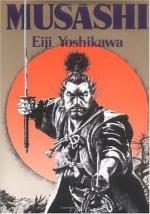 Eiji Yoshikawa
This Study Guide consists of approximately 36 pages of chapter summaries, quotes, character analysis, themes, and more - everything you need to sharpen your knowledge of Musashi.

This detailed literature summary also contains Topics for Discussion and a Free Quiz on Musashi by Eiji Yoshikawa.

Musashi—known at the beginning of the story as Takezo—and Matahachi, friends from the same village who had joined the military together, wake on the battlefield to realize that they are among the few survivors. Both are wounded and fear capture. When they find a small farmhouse, they ask for help and a woman named Oko allows them to sleep in the woodshed. Her daughter, Akemi, brings them medicine and food and they discover she is the girl at the battlefield and that she was robbing corpses on orders from her mother. Healed, the two decide to leave but Musashi wakes to find that Matahachi has left with Oko and Akemi. Matahachi lives off the two for some time as they run a tea house. His failure to return to his own village prompts his mother, Osugi, to hate Musashi and to vow that she will kill him. Musashi is briefly captured by the opposing army but Matahachi's former fiancée, Otsu, helps him escape. He soon parts with her, determined to follow the way of the sword.

The two have many adventures, with their paths crossing many times over the coming years. Otsu makes friends wherever she goes and gains a great many admirers, but her heart always belongs to Musashi. Musashi encounters a young man named Jo and takes him in as a student. Jo eventually encounters his own father and the pair return to the way of the samurai. Musashi later takes in another student, this one named Iori. In truth, Iori is Otsu's younger brother though Otsu was abandoned by her parents long before Iori was born. Iori, having learned the identity of his sister, is frustrated with his inability to catch up with her or to return to his teacher, Musashi.

Matahachi eventually realizes that he has to take control of his life and one day walks out of Oko's house to start a new life of his own. He works as a laborer until he happens to see the murder of a young man. Taking the man's possessions, he finds a certificate from a martial arts teacher and some gold. He sets out to return the money but soon spends the money along the way, briefly taking the identity on the certificate only to later find that certificate did not belong to the slain man after all. That warrior, Kojiro, is alive and well and encounters Matahachi while Matahachi is using his name. Matahachi settles down with Akemi to raise their child and the three are at the final bout between Musashi and Kojiro.

Musashi spends his life in search of the "Way of the Sword" and finds himself always lacking as he continues to seek answers. Meanwhile, Kojiro has sold himself as a retainer and his natural cruelty is seldom held in check. The final battle between the two—years in the making—is brief, with Musashi the winner.

More summaries and resources for teaching or studying Musashi.