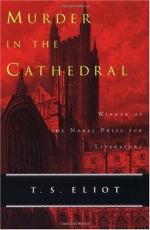 Compare & Contrast Murder in the Cathedral by T. S. Eliot

T. S. Eliot
This Study Guide consists of approximately 70 pages of chapter summaries, quotes, character analysis, themes, and more - everything you need to sharpen your knowledge of Murder in the Cathedral.

1170: King Henry II and Archbishop Thomas Becket begin to quarrel over the growing strength of the Catholic Church, marking the first hints of an anti-Catholic sentiment lasting until the Catholic Emancipation Act of 1829, which permitted Roman Catholics to sit in Parliament and hold almost any public office.

Today: Although their British counterparts generally live in peace, tensions between Irish Catholics and Protestants are still seen in the number of bombings and acts of terrorism in Northern Ireland. British Prime Minister Tony Blair holds talks with Irish representatives in an effort to end these and other problems, collectively referred to as the "troubles."

12th-14th Centuries: "Miracle" and "Morality" plays grow in popularity. These plays present the lives of Christ or the saints in dramatic form...

More summaries and resources for teaching or studying Murder in the Cathedral.

Murder in the Cathedral from Gale. ©2005-2006 Thomson Gale, a part of the Thomson Corporation. All rights reserved.