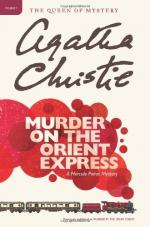 Agatha Christie
This Study Guide consists of approximately 58 pages of chapter summaries, quotes, character analysis, themes, and more - everything you need to sharpen your knowledge of Murder on the Orient Express.

Murder on the Orient Express Summary & Study Guide includes comprehensive information and analysis to help you understand the book. This study guide contains the following sections:

This detailed literature summary also contains Topics for Discussion on Murder on the Orient Express by Agatha Christie.

Murder on the Orient Express, by Agatha Christie, is a classic detective novel about a murder committed in the middle of the night on a train traveling from the Far East to Europe. While the train is stuck in a snowdrift, the identities, motives and alibis of the passengers are investigated by the renowned Belgian detective Hercule Poirot. As Poirot delves into the mystery of what happened that fateful night, the book explores themes relating to the nature of justice, the power of family ties, and the inevitable triumph of logic.

The novel begins with the world famous Belgian detective Hercule Poirot waiting to board a train for home. As he waits, he's observed by a young English woman (Mary Debenham) traveling to England, who looks at his eccentric appearance and considers him harmless. After he boards the train, he in turn observes a polite relationship developing between Miss Debenham and another British passenger, Col. Arbuthnot. Meanwhile, an urgent telegram summons him to England, where developments he predicted in a murder investigation there have come to fruition sooner than expected. As Poirot arranges to travel to London on the Orient Express, two things happen - he reunites with an old friend, M. Bouc, a manager of the Orient Express also traveling that night, and encounters an American (Ratchett) with eyes he later describes as similar to those of a caged animal.

When Poirot and M. Bouc attempt to board the Orient Express, they learn that all the available compartments are booked. Poirot is placed temporarily in the compartment of a young American named MacQueen, who turns out to be Ratchett's secretary. The following day in the dining car, Ratchett (who is aware of Poirot's reputation) offers Poirot a job as his bodyguard, saying his life has been threatened. Poirot, in response to both Ratchett's manner and his face, refuses. The following morning, after a night of noisy disturbances and confusion, Ratchett is found murdered. M. Bouc, desperate to preserve the reputation of his train, begs Poirot to investigate. Poirot agrees.

The remainder of the novel chronicles Poirot's investigations and their outcome. With the help of M. Bouc and a Greek doctor, he examines several clues found in the murdered man's compartment - a watch apparently broken at the time of the murder, a burnt note, a pipe cleaner, and a delicate ladies' handkerchief. He interviews each of the passengers, who include Miss Debenham and Col. Arbuthnot, an elderly Russian princess and her German maid, a talkative American widow, Ratchett's secretary and valet, a Hungarian diplomat and his wife, a Swedish missionary, an Italian car salesman, and an American detective. He also interviews the Conductor of the coach on duty at the time Ratchett was murdered. As Poirot is perplexed to discover, the passengers and Conductor give each other alibis, present contradictory facts, and deny involvement in the murder - even when the victim turns out to be the notorious kidnapper Cassetti, and even when the passengers and Conductor all prove to have had a connection with the Armstrongs, one of the families he (Cassetti) victimized.

Eventually Poirot arrives at what he considers to be the truth - that the passengers and Conductor, because of their connection with the Armstrong family, and because Cassetti escaped justice for his crimes, took it upon themselves to administer that justice, and executed him in the way he should have been executed by the legal system. A passionate plea from one of the passengers (the mother of Mrs. Armstrong, a renowned actress posing as the talkative widow Mrs. Hubbard), convinces Poirot that true justice has indeed been served. He (Poirot) agrees to propose a second solution to the crime to the police, a solution that fits with all the clues and evidence but which lets all the members of the extended Armstrong family (including Miss Debenham and Col. Arbuthnot, who are in love and eager to marry) free to pursue their lives.

Murder on the Orient Express from BookRags. (c)2022 BookRags, Inc. All rights reserved.