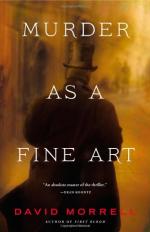 Murder as a Fine Art Summary & Study Guide includes comprehensive information and analysis to help you understand the book. This study guide contains the following sections:

This detailed literature summary also contains Quotes and a Free Quiz on Murder as a Fine Art by David Morrell.

"Murder as a Fine Art" by David Morrell is a story about a writer named Thomas De Quincey who writes essays to document his struggle with an addiction to laudanum. In addition to chronicling events in his personal life, De Quincey shares details about some of the most heinous murders in history.

At the beginning of the novel, a crime is being committed. The thoughts and acts of a ruthless killer, called the "artist of death," are revealed as he plans and carries out the murders of a shopkeeper and his family. After committing the crime, the murderer's senses savor the crime scene until he hears a knock at the door. He escapes and takes a taxi to the other side of town where he blends in with theater goers.

The murders of the shop keeper and his family seem to be copycat crimes of previous killings which De Quincey had detailed in his essays. As a result, Scotland Yard becomes interested in De Quincey as a possible suspect. To heighten Scotland Yard's suspicions, De Quincey makes connections from the past to the recent murders in ways that others miss.

Lord Palmerston is the Home Secretary for the British Empire. Although he is an official, he is promoting his own kind of crime by hiring six men to destabilize all of Europe while Britain remains strong. He supplies the men with funding for weapons, ammunition, explosives, and even alcohol as they create chaos. Given that Lord Palmerston's goal is to keep Britain's power and peace intact at any cost, it comes as no surprise when he decides to quieten the fears of the public by having Thomas De Quincey arrested for the murders. He is not concerned that the real killer may still be on the loose. Sean Ryan, the lead detective in the case, soon realizes that De Quincey is not the killer. However, he also recognizes that De Quincey may be able to provide insight and direction.

De Quincey's daughter, Emily, has been her father's constant day to day companion before his arrest. He has shared his stories with her, and she has kept notes on their conversations. When he is arrested, she insists on staying in the building with him. De Quincey is sure that an attempt will be made on his life, even though he is in a locked cell. His thinking is correct. A killer checks his cell, but he is able to hide behind a mattress that is against the wall. The killer moves on and checks the rest of the cell block. Then, he returns to find De Quincey's hiding place and and tries to kill him. De Quincey defends himself long enough so that Joseph Becker, the constable, arrives.

Shortly after Becker saves De Quincey, Detective Ryan arrives to tell them that more murders have been committed since De Quincey's arrest. As such, Lord Palmerston no longer has any reason to keep De Quincey locked up. Palmerston is not pleased with the detective's reasoning. Palmerston’s security guard, Robert Brookline, lists convincing reasons that De Quincey could still be linked to the murders. Becker is ordered to put De Quincey in cuffs. Detective Ryan slips Emily the universal handcuff key which she puts in her father’s pocket as she hugs him goodbye. De Quincey gives Emily a clue as to how to find him. Soon after, he escapes and disappears.

Detective Ryan, Emily, and Becker go back to Scotland Yard and discover Margaret Jewell. She has been waiting for hours to see Ryan. She suffers from such guilt and remorse that she will speak to no one else. When she finally sits down with Ryan, she tells him she is harboring information that might have prevented the most recent murders. She finally tells him about the man who was responsible for the Ratcliffe Highway murders, admitting that he fathered her son. She gives information about the man whom she lived with afterward and how he cared for her son Robert. Robert took the man's last name – Brookline.

Finally, the pieces fall into place. Brookline worked in India where he was paid to kill people. He had learned about opium while working for the British East India Company. He became obsessed with ‘fixing’ the British Empire by beginning a revolution sparked by fires, explosions, thefts, and chaos. He had tried to use De Quincey by setting him up as a likely suspect because of the articles and books he has written in the past. By studying De Quincey, he had learned how to manipulate the situation.

In the end, Brookline is unsuccessful. By coincidence, he dies on the same spot where his father is buried.

Murder as a Fine Art from BookRags. (c)2022 BookRags, Inc. All rights reserved.