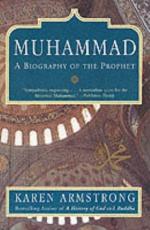 Muhammad: A Biography of the Prophet Summary & Study Guide

Karen Armstrong
This Study Guide consists of approximately 25 pages of chapter summaries, quotes, character analysis, themes, and more - everything you need to sharpen your knowledge of Muhammad.

Muhammad: A Biography of the Prophet Summary & Study Guide Description

Muhammad: A Biography of the Prophet Summary & Study Guide includes comprehensive information and analysis to help you understand the book. This study guide contains the following sections:

This detailed literature summary also contains Topics for Discussion and a Free Quiz on Muhammad: A Biography of the Prophet by Karen Armstrong.

Muhammad, A Biography of the Prophet, by Karen Armstrong, tells the story of the Prophet Muhammad and how the religion of Islam came into existence. At this time, Christianity and Judaism had developed and had a form of written scripture. The Arabs, who were still basically a tribal nomadic society, did not have any written scripture which bothered them. This is what the Prophet Muhammad provided them with even through he was illiterate.

At the time of Muhammad, some of the Arabs had settled in urban areas. Mecca was a trading and financial center. Society was based on tribal law and tradition and the prevailing religion was paganism. al-Llah was accepted as the High God but the people also clung to the lesser gods. Muhammad like the others, was a pagan who took his religion seriously. He made his yearly spiritual retreat to a cave on Mount Hira when in 610, he was visited by an angel who commanded him to recite. Muhammad began to recite what would become the Quran.

Several years later he began his preaching for a society based on decency and humane treatment for the disadvantaged and women. Others around him wrote down his preaching and revelations which formed the basis for the religion of Islam. Many Arabs were reluctant to give up their pagan gods and tribal traditions, which brought the Prophet into conflict with the Quraysh tribes of Mecca. When Muhammad's uncle died, he lost his protection in Mecca and moved to Medina. There he developed the concept of the umma or community where the converts gave up their tribal membership and became members of the umma. The religion of Islam grew and flourished.

Armstrong does a good job explaining how the Quran came into existence and what the different precepts of Islam are. She feels that the cause of the tensions between the Islamic world and the West are due to a misunderstanding of the Prophet, and she wrote the book to try to clear-up the misunderstandings. Contact with the West and the acceptance of some Western culture resulted in a loss of identity for the Arabs. Fundamentalism, she feels, is an attempt to re-establish roots and the Arab identity.

The book is rather quick reading and good for anyone seeking information about how Islam and the Quran were formed. It is informative and not boring to read. The reader will learn the information without straining because all the concepts and terms are defined and explained in an easy way for the reader to understand.

More summaries and resources for teaching or studying Muhammad: A Biography of the Prophet.

Muhammad: A Biography of the Prophet from BookRags. (c)2022 BookRags, Inc. All rights reserved.