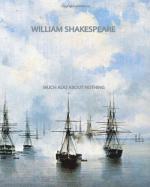 Much Ado about Nothing Summary & Study Guide

William Shakespeare
This Study Guide consists of approximately 20 pages of chapter summaries, quotes, character analysis, themes, and more - everything you need to sharpen your knowledge of Much Ado about Nothing.

Much Ado about Nothing Summary & Study Guide Description

Much Ado about Nothing Summary & Study Guide includes comprehensive information and analysis to help you understand the book. This study guide contains the following sections:

This detailed literature summary also contains Quotes and a Free Quiz on Much Ado about Nothing by William Shakespeare.

Much Ado About Nothing begins with the return of soldiers from abroad: Don Pedro, accompanied by Claudio and Benedick, return triumphant to the home of Leonato, an Italian nobleman. Claudio immediately falls in love with Leonato's daughter, Hero, while Benedick verbally spars with Leonato's niece, Beatrice (though this is just a form of flirting). After a masked ball, Claudio and Hero decide to get married. Impatient for the festivities to begin, the group decides to align Beatrice and Benedick by allowing them to overcome their pride and admit their love for one another. The scheme works. However, another scheme, perpetrated by Don Pedro's illegitimate brother (Don John) and his cronies, makes Claudio believe that Hero has been unfaithful to him. He spurns her on their wedding day, humiliating her and her family. However, Don John's cronies confess to their misdeed, and Claudio, led to believe that Hero has died of shame, agrees to marry Leonato's other "niece," who is really Hero in disguise. At the wedding, Hero is unmasked as her true, virtuous self, and the two sets of lovers are prepared to be happily married.

More summaries and resources for teaching or studying Much Ado about Nothing.

Much Ado about Nothing from BookRags. (c)2022 BookRags, Inc. All rights reserved.