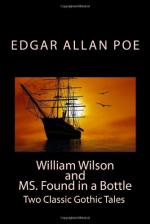 MS. Found in a Bottle Themes

Edgar Allan Poe
This Study Guide consists of approximately 7 pages of chapter summaries, quotes, character analysis, themes, and more - everything you need to sharpen your knowledge of MS. Found in a Bottle.

MS. Found in a Bottle Summary & Study Guide includes comprehensive information and analysis to help you understand the book. This study guide contains the following sections:

This detailed literature summary also contains Topics for Discussion on MS. Found in a Bottle by Edgar Allan Poe.

Poe uses the theme of insanity vs. insanity, and all the nuances in between, in many of his short stories, often charging his insane narrators with the futile task of proving that they are not mad. Often, in stories such as The Tell-Tale Heart and The Imp of the Perverse, though the respective narrators of each claim they are of sound mind and seem completely unremorseful, they are driven to confess by a persistent reminder of their crime. In other tales, such as The Cask of Amontillado, the narrator is unquestionably insane, and yet there is no remorse and no confession, and though his actions are insane, he is very levelheaded when it comes to their execution. Crime is not the only indicator of insanity, however. In Ligeia, the narrator commits no crime that is spoken of, yet there is an air of instability to his narrative. He does admit to heavy opium use, but it is his overwhelming grief and obsessive love for Ligeia that cast a questioning light on his state of mind. All this mental instability leads to a stable of unreliable narrators; Poe was a master at creating believable, unreliable narrators, so much so that many historians have cast him as much less stable than he was, instead of recognizing his skill at crafting first-person narration.

In almost all of Poe's works, death is a central issue. Whether a tale of murder (The Cask of Amontillado, The Tell-Tale Heart), a tale of horror (The Fall of the House of Usher), a Gothic horror romance (Ligeia), or an allegory (The Masque of the Red Death), Poe's stories, by nature of his preferred genres, are full of death. Though many of his stories deal with either the murder of someone, the solving of a murder, or the supernatural resurrection of someone who has died, it is his allegorical look at mortality, The Masque of the Red Death, which most clearly sums up Poe's themes of death. Here, very simply, death is seen as inevitable, something that can be avoided by no one, no matter what precautions they take or how wealthy they are. Poe used death to terrify people, as he was a writer of horror stories and most people are afraid of death. Yet he seemed fascinated by it, and with his use of dark and Gothic elements seemed to embrace it.

Throughout many of Poe's short stories, characters are placed in stifling, claustrophobic settings that add to the overall feeling of panic and fear. In some, such as Ligeia and The Fall of the House of Usher, most of the action occurs in one room or one house, closing off the characters to any outside influence. The Pit and the Pendulum takes this idea a step further, imprisoning the narrator in a dungeon. Poe highlights this theme in The Cask of Amontillado, in which the murderous narrator literally encloses his victim in a tomb. In The Masque of the Red Death, the castle is completely cut off from any means of entrance or exit. The most intense confinement, however, can be found in the minds of Poe's narrators. While we as readers experience physical isolation (i.e. one, room, one house, one walled-up vault), the intensity of the confinement is exacerbated by the point of view of the narrators. We see the world through one set of eyes, and the thoughts of these narrators, often thoughts that are unstable at best, imprison us in a non-physical "prison" of panic and fear.

More summaries and resources for teaching or studying MS. Found in a Bottle.

MS. Found in a Bottle from BookRags. (c)2021 BookRags, Inc. All rights reserved.