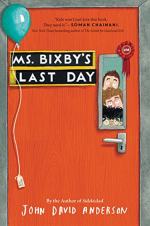 Ms. Bixby’s Last Day is a children’s novel by John David Anderson in which sixth-grade best friends Topher, Steve, and Brand learn their favorite teacher, Ms. Bixby, has cancer. The narrative is related from the first-person perspectives of these three protagonists with shifts in perspective from chapter to chapter.

The boys intend to make Ms. Bixby’s last day teaching as memorable as possible. When the novel begins, Topher, Steve, and Brand are enjoying their year though summer is approaching. The creative Topher, the brilliant Steve, and the dedicated Brand have enjoyed their years because of Ms. Maggie Bixby, a 35-year-old teacher who is patient, kind, and incredibly wise. The boys are stunned when, in May, she announces she has pancreatic cancer and the following Friday will be her last day teaching for the year. Ms. Bixby declares she will beat the cancer and come back. The three boys are not happy about Ms. Bixby leaving, but desperately want her to get better.

As the following week begins, Principal McNair announces that Ms. Bixby will not be finishing out her last week. Topher, Steve, and Brand later overhear teachers talking about how Ms. Bixby is already undergoing rigorous treatment, and that she will be flown to Boston on Saturday to continue because she has family there. The three boys are stunned because they have so badly wanted to say goodbye and to say thank you. Ms. Bixby has touched each of their lives in important ways. She has helped Topher, whose parents work all the time, and who is an artist, to know that somebody will always notice him. She has helped Steve, who is very rational and scientific, to appreciate mystery and believing in things not seen. She has given Brand, whose father is disabled and refuses to try to get better, an outlet from being an adult by taking him grocery shopping on Friday evenings so Brand does not have to walk.

Brand also carries a secret about Ms. Bixby that no one else knows. One night, when she brought him home from the grocery store, they found Brand’s dad unconscious on the porch, having fallen with his walker. Ms. Bixby then drove them to the hospital where she encouraged him to confront his issues in life head on, rather than running away. Now in the present Brand decides that even though Ms. Bixby is in the hospital, they will still give her a perfect final day. Topher quickly agrees, and the cautious Steve reluctantly agrees. The boys skip school on Friday, and through a series of misadventures and mishaps, manage to procure a cheesecake, McDonald’s fries, a copy of The Hobbit, and Jack Daniels whiskey. Their adventures lead to a confrontation with a man who has robbed them, support for Steve in confronting his older and critical sister, and with each of the protagonists confronting the idea that life changes and changes cannot be stopped.

When the boys arrive at the hospital, Ms. Bixby is surprised but happy to see them. She enjoys the fries and the cheesecake, but saves the Jack Daniels for later. As she did in class, she now reads aloud to the boys from The Hobbit, and then thanks them for what they have done for her. She tells them they have given her a better last day than she could have hoped for. She then heads off to another round of treatment. Brand comes to realize that ultimately, it is not last days that matter most, but the days before because they stay with you the longest and stand out clearest – such as when Ms. Bixby gave him rides to the grocery store. In the Epilogue, the novel shifts back in time to January when Ms. Bixby had her students write about what their perfect last day would be like, at which time she shared her own – consisting of cheesecake, McDonald’s fries, and wine.