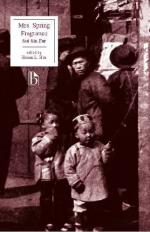 Ah Oi is described as the prettiest young woman in San Francisco. She is quite popular and Mrs. Spring Fragrance introduces her to Man You knowing that he will easily fall in love with her beauty and charm. When Ah Oi and Man You decide to marry, Laura is no longer obligated to Man You and is free to marry Kai Tzu.

Laura is the young Chinese-American woman whom Mrs. Spring Fragrance is trying to help. She has been in love with Kai Tzu for some time, but because of her parents's insistence that she marry the man they have chosen for her, Laura believes she will have to live her life in misery. Laura represents the more Americanized second generation of Asian Americans who often struggle with their parents conservative and traditional lifestyles. As Laura's Chinese name in...