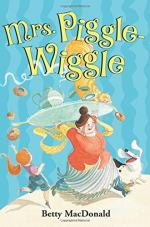 Betty MacDonald
This Study Guide consists of approximately 42 pages of chapter summaries, quotes, character analysis, themes, and more - everything you need to sharpen your knowledge of Mrs. Piggle Wiggle.

Hubert Prentiss has many toys, and his room is always a mess. When Mrs. Prentiss reaches the end of her rope, she calls Mrs. Piggle-Wiggle for advice. Mrs. Piggle-Wiggle says Mrs. Prentiss should stop entering Hubert's room and just allow him to do whatever he wants. Soon, Hubert is no longer able to leave his room because the toys are piled up against the door. He remains there with his mom handing food up to his window until Mrs. Piggle-Wiggle comes by, singing and leading all the other children from the neighborhood. She gives Hubert a note that says the only way out of the “trap” of his messy room is to clean it up. She promises to wait for him if he starts right away. Hubert does, and he is proud of himself when he has finished.

Mary O'Toole begins talking back to her teacher and her parents, and her mother is at a loss of how to make her stop. She calls on Mrs. Piggle-Wiggle for advice, and Mrs. Piggle-Wiggle lends her a parrot named Penelope. Penelope is much ruder than Mary, and can usually shout out a smart remark before Mary can even compose her face into a smirk. Initially, Mary and her friends are thrilled with Penelope and spend a lot of time listening. Soon, however, Mary grows tired of the remarks and realizes this is how other people feel about her. She returns Penelope to Mrs. Piggle-Wiggle and promises to rush right home to practice her music.

Dick Thompson is selfish and refuses to share his possessions with anyone. Mrs. Piggle-Wiggle's suggestion in this situation is to give him exactly what he wants. She lends Mrs. Thompson her “Selfishness Kit” and Mrs. Thompson helps Dick put padlocks and labels on every item he owns, from his toothbrush to his dog. Within a short time, the other students are making fun of all the labels and then stop playing with him because the labels say “don't touch.” He spends a lot of time unlocking padlock and then loses a couple of the keys so that he cannot access all his possessions. He quickly learns that sharing is far more fun.

When a little girl named Patsy refuses to take a bath, her mother turns to Mrs. Piggle-Wiggle for help. Mrs. Piggle-Wiggle suggests the “Radish Cure” and Patsy's mother allows her to go for weeks without a bath. When she has accumulated a nice layer of dirt, Patsy's parents plant radish sees on her face and arms. In a few days, Patsy is horrified to discover plants have sprouted all over her. Her mother begins harvesting the radishes and Patsy spends hours in the shower, getting clean.

Mrs. Gray is tired of spending an hour arguing with her children, Bobby, Susan, and Larry, over bedtime. She asks for advice and Mrs. Piggle-Wiggle suggests she allow the children to stay up as late as they want. Within a few days, they have missed a trip to the beach, fallen asleep during a movie, and slept through most of a birthday party. By then, the realize the value of a reasonable bedtime and ask if they can always go to bed at eight.

Allen is a good boy until one morning when he suddenly decides that he cannot take regular bites of food. He takes bites so tiny that he is eating one grain of his breakfast mush at a time and his mother takes his dishes away before he has eaten even a fraction. That continues for a couple of days until Allen's mother calls Mrs. Piggle-Wiggle for advice. She sends Allen's mother four sets of dishes, each tinier than the one before. Allen continues to eat less each day until Mrs. Piggle-Wiggle says it is his turn to exercise her pony. Allen is so weak that he cannot go through with the exercise, and is so sad that he missed his turn with the pony that he begins to eat normally again.

Joan and Anne are twins who begin each day by quarreling. Their parents are tired of the constant fighting but Joan and Anne seem to find something to fight about in every situation. When their mother, Mrs. Russell, has had enough, she calls Mrs. Piggle-Wiggle for advice. Mrs. Piggle-Wiggle says Mrs. Russell should write down each argument the girls have, and that Mr. and Mrs. Russell should spend the entire following day having the same arguments the girls have. By the time they are sitting down to supper the following day, Jane and Anne feel they cannot take anymore. Mr. and Mrs. Russell say they have “caught”