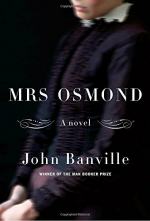 John Banville
This Study Guide consists of approximately 37 pages of chapter summaries, quotes, character analysis, themes, and more - everything you need to sharpen your knowledge of Mrs. Osmond.

The following version of this book was used to create the guide: Banville, John. Mrs. Osmond. 2017, Alfred A. Knopf.

Mrs. Osmond begins with protagonist Isabel Osmond arriving with her maid in London by train from Gardencourt, the English estate in which her cherished cousin, Ralph, recently passed away. Isabel had gone to her dying cousin against her husband’s wishes and, after learning of his long-time affair with one of her good friends, she travels throughout Europe seeking advice from various friends and acquaintances.

Before meeting with any friends, Isabel withdraws an amount of money from the bank large enough to concern the bankers. The first acquaintance that Isabel visits is aging socialist, Miss Janeway, who she has only met once before, and she takes the bag of cash with her. At their first encounter, the old woman had spoken words to Isabel that had seemed both encouraging and a warning: “You seem to me, Miss Archer, a person possessed of a large potential; do be careful not to under-spend your resource” (32). Now, after fearing that she was a grand disappointment to her deceased cousin, Isabel arrives at Miss Janeway’s seeking assistance with recent occurrences in her life. Rather than directly ask Miss Janeway about how to handle her marital issues, however, Isabel mostly thinks out loud as well as entertains a winding internal dialogue, and does not receive much advice from her host. At the end of the visit, however, Isabel comes to the decision that she will purchase her freedom from her husband. She departs from Miss Janeway’s, accidentally leaving her bag of money.

Next, Isabel visits one of her best friends, Henrietta Stackpole. Although the two have known each other for years and are both Americans living in Europe, the women could not be more different. Henrietta is loud and brash while Isabel is refined and reserved. Isabel does not look forward to the inquisition that she knows she will suffer, although Henrietta always means well. Unfailingly, Henrietta chastises Isabel for settling down with self-centered Mr. Osmond rather than living up to her potential. She exclaims, “You were our blazon!...We were furious at you, furious! You had so much, and you exchanged it for...a pinch of dry dust that would fall through your fingers and leave not a trace!” (99).

Isabel leaves Henrietta and travels to Paris with her maid, Staines. She encounters an old acquaintance, Ned Rosier, at the Louvre, but the meeting is awkward. Mr. Rosier had tried and failed to win Isabel’s step-daughter Pansy’s hand in marriage, but was refused by Mr. Osmond. Later that night, Isabel attends a party at the Princess d’Attrait’s. Although the princess is Isabel’s closest friend in Paris, the conversation turns tense when the subject becomes Mr. Osmond, and the short encounter comes to an end. Wandering around the party, Isabel is drawn to a small room but is shocked to find Madame Merle, her former friend and her husband’s mistress of twenty years, seated and speaking to two men.

Isabel does not know when the men leave the room and can only focus on the fact that Madame Merle is present. Isabel believed the woman to have already made her way to America, and Madame Merle confirms that she is on her way. Surprising herself, Isabel shows great restraint and does something that she never believed that she would do - she invites Madame Merle back to Italy, where they lived previously, and confirms that she will have accommodation if she does so. Isabel then takes her leave.

The next few chapters focus on Mr. Osmond and his occupancy at Bellosguardo in Italy. The setting opens on an aging Mr. Osmond regarding the Italian landscape and watching his sister, the Countess Gemini, come up the drive. The Countess has always feared her brother and is nervous for their encounter as she was the one to tell Isabel of Mr. Osmond’s long-time affair with Madame Merle. The siblings converse and Mr. Osmond calls on his daughter, Pansy. Rather than threatening or berating his sister, Mr. Osmond punishes the Countess by making her agree to taking Pansy to England where she is to look for a husband. At the end of the meeting, the Countess informs her brother that Madame Merle is to return to Italy at Isabel’s request.

Isabel then visits her aunt Lydia Touchett, Ralph’s mother, at the Palazzo Crescentini in Florence. Isabel asks, “Have I been a great disappointment to you?” to which the old woman replies, “You have not been great in anything - that’s the trouble” (229). Mrs. Touchett is unamused by gossip and advice-giving, but she becomes intrigued when she figures out Isabel’s plan. She asks, “You would have [Madame Merle] as an enduring affront to your husband - is that it?” (233). Mrs. Touchett had been very close to Madame Merle until she abruptly fled Italy due to the recent scandal. Although Mr. Osmond had claimed that Pansy was the daughter of his first, deceased wife, her true mother is Madame Merle. Further on in their conversation, the isolated old woman confesses to Isabel that she, too, had once been betrayed by her husband and that his mistress had also given birth to a child.

Isabel becomes ill with a fever for many days. Finally, her fever breaks and she knows that it will be the day that she will confront her husband. Mr. Osmond ask as to what Isabel did with the large amount of money that she withdrew in London, and her only response is that the money went to a good cause. Isabel is able to tell that Mr. Osmond is riled by both his pouring himself a drink and by his hand shaking as he does so. Usually, Mr. Osmond is calm and sharp-witted. The two argue as to who the money belonged to as, although it was Isabel’s fortune, her husband had made investments that led to a substantial gain. Finally, Isabel declares that she is seeking freedom for both herself and Pansy.

After the confrontation with her husband, Isabel goes to visit Madame Merle who claims that the offer that Isabel provided was of a questionable amount and that she does not trust her. Surprisingly, she has invited Mr. Osmond to the meeting so that Isabel must face both of them at once. The young woman manages to keep her calm and the presence of both her husband and his mistress works out to her benefit as she explains that the accommodation that she has worked out for Madame Merle is none other than Mr. Osmond’s residence in Rome, the Palazzo Roccanera, which was in Isabel’s name before.

At the end of the novel, it is learned that the large sum of money that Isabel withdrew in London was gifted to social activist Miss Janeway. As Miss Janeway’s health is failing, Isabel tells the woman’s nephew, Mr. Devenish, that she will help take care of the old woman until she meets her end. Also, Isabel declares that she is considering putting her talents to use in social reform.

More summaries and resources for teaching or studying Mrs. Osmond.