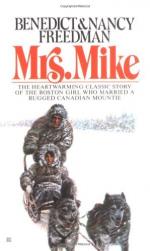 Benedict Freedman
This Study Guide consists of approximately 47 pages of chapter summaries, quotes, character analysis, themes, and more - everything you need to sharpen your knowledge of Mrs. Mike the Story of Katherine Mary Flannigan.

This detailed literature summary also contains Topics for Discussion and a Free Quiz on Mrs. Mike the Story of Katherine Mary Flannigan by Benedict Freedman.

Mrs. Mike, the Story of Katherine Mary Flannigan by Benedict and Nancy Freedman is a traditional coming of age saga set in the wilderness of Alberta, Canada. Sixteen-year-old Katherine Mary O'Fallon travels via train from the civilization of Boston, Massachusetts to the wilds of the Great Northwestern Territory to visit her Uncle John in hopes that the cold and dry air will ease the painful symptoms of her pleurisy. She heads off on her journey with a blind courage, a sense of adventure, a desire to experience worldly events, an opinion of life as a fairy tale, and a young impressionability.

While at her Uncle John's ranch, she falls in love with Sergeant Mike Flannigan and they are soon married. Sergeant Mike receives orders from the Canadian Government which send him even further North to a place called Hudson's Hope. The trip proves brutal with the frigid air and the snow. Katherine's pleurisy stabs her in the chest and Mike takes her to the Howard's cabin to rest. He diagnoses a collapsed right lung and nurses her back to health. Katherine depends on Mike for everything.

In Hudson's Hope, Katherine plays assistant to Mike's oral surgeon when the Indian brave named Atenou suffers an abscessed tooth. Mike gets out the instruction manual and quickly studies how to pull a tooth. Katherine sees Mike's anxiety for the first time. She knows he is capable. However, this is the first time she witnesses a lack of sureness in her husband.

Hudson's Hope residents experience a dry springtime and a forest fire begins to rage. Sergeant Mike orders everyone, including his pregnant wife, to wade into the widest part of the Peace River where they should be safe. He is not able to save everyone and thirty-seven men, women, and children die in the fire. The rebuilding process begins with the community closer on emotional and spiritual levels.

Katherine is pregnant with their first child and they head to a place called Grouard on orders from Mike's employer. On their way, Katherine feels labor pains. Mike promises to get her to Peace River Crossing where Mrs. Mathers is a trained nurse who can deliver the baby. When they arrive, Katherine does not like Mrs. Mathers' bedside manner and Mike thinks of a Plan B. Mrs. Carpentier, a Cree Indian midwife, comes to help Katherine in labor and delivery. Katherine thinks of Mrs. Carpentier as a fairy godmother and she nicknames her Sarah after the mother of a race in the Bible.

When the family of three Flannigans arrives in Grouard, Katherine has a premonition when they pass the cemetery. She sees herself walking through the gates. She quickly shakes this off and proceeds to meet her new neighbors and friends.

Katherine meets Constance Beauclaire, the only other white woman in Grouard, and becomes good friends with her. Constance reminds Katherine of the mother of sorrows because she has already had four families and many of her nine children have died. Katherine learns a great lesson from this woman on survival and distinguishing between what is important in life.

Mike thinks Katherine needs some help around the house and he asks Kathy to go the Mission church and orphanage to inquire about bringing one of the girls home. Katherine finds a fifteen-year-old girl named Anne, Mamanowatum in Indian, which means Oh-Be-Joyful. The girl is on punishment row in the orphanage when Katherine first sees her. Yet Katherine is drawn to this girl for her storytelling abilities with the younger children on the row. Katherine also comes face to face with her own lack of important decision-making skills.

Oh-Be-Joyful's boyfriend, Jonathan is a proud Indian character whom most at the orphanage think a bad influence. The sisters do not want the girl to be treated as an Indian woman is treated by the man in their life. The women are made to do all the heavy lifting and they are beaten.

When Jonathan enters the Flannigans' life, he is given a chance by Sergeant Mike and Katherine. When Jonathan is accused by a man named Cardinal of attempting to shoot him with an arrow, Mike intelligently proceeds to find out the truth. The Indian men come to a satisfactory conclusion on their own.

Katherine's visions of a fairy tale life are dimmed when she visits Sarah's witch doctor shed or workroom to receive the squaw tea that is helpful in easing the discomfort of childbirth. Katherine learns many lessons from Sarah. This time she learns that not everything which is pretty is good for you and not everything which is ugly is bad for you. Katherine sees and smells the decay of dead plants and animals in this nightmarish scene.

Mrs. Marlin enters the shed to ask for poison to kill her unborn baby. Sarah does not give it to her at first; however, Sarah knows what can happen to an unwanted child who lives. Sarah agrees to give it to Mrs. Marlin.

Sarah's son, Larry, gets caught in a bear trap, from the knee down. Sarah, a strong and sturdy Indian woman, uses a saw to amputate her son's leg, in order that he may live. When Katherine witnesses this horrid scene, she thinks that she will never be the strong mother who is her friend Sarah.

Mike is called away to apprehend Cardinal from the Blackfeet Territory, where he is accused of baiting and switching less valuable furs for the more higher quality ones. When Cardinal is locked in jail back in Grouard, Jonathan is blamed for stabbing him with his knife in the neck and killing him. Jonathan is then locked in a cell, much to the dismay of his girlfriend Oh-Be-Joyful. It is not until Katherine is in labor with her second child that the group finds out the truth of who killed Cardinal.

Mrs. Marlin visits Katherine after the birth of the baby and she tries to steal the infant, saying that it is her child. The spirit of her dead baby went into this one and the little boy belongs to her. Mrs. Marlin is so upset that she confesses to killing the father of her baby, Cardinal, in his jail cell.

The McTavish brothers return to Grouard from Scotland and bring with them valuable books. Katherine chooses to read the history of China, the world's oldest civilization. Katherine begins to feel the need for escape.

Soon, an epidemic of diphtheria ravages the village. The Flannigans' children die and Katherine finally feels a desperate need to escape. She returns to Boston, Massachusetts. However, the peoples, places and things of Boston seem foreign to her. She realizes the culmination of the great many lessons she learned over the past four years in the Northwest Territory. She realizes what true love is and she returns to Mike.

Tragedy continues to steal the lives of the villagers. This time, war takes the lives of Constance's sons, Paul and Timmy, and the birth of twins claims the life of Constance's daughter Madeleine. The flu steals Constance from the earthly world but before it does, Constance asks Katherine and Mike to take the twin babies.

In the end, Katherine finds peace within herself as a woman. She realizes that she is only one thread in the larger fabric of life. Yet, all threads cross each other, similar to the knot she ties when she sews. Katherine's journey from child to woman ends with her gaining control of her emotions, becoming an independent thinker, and knowing that it is not the big things in life that matter. It is the smaller things of daily life that make a life and make happiness.

More summaries and resources for teaching or studying Mrs. Mike the Story of Katherine Mary Flannigan.