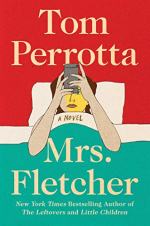 This Study Guide consists of approximately 32 pages of chapter summaries, quotes, character analysis, themes, and more - everything you need to sharpen your knowledge of Mrs. Fletcher.

This detailed literature summary also contains Quotes and a Free Quiz on Mrs. Fletcher by .

NOTE: The following version of the book was used to create this study guide: Perrotta, Tom. Mrs. Fletcher. Scribner, 2017.

The novel opens in the fictional Massachusetts town of Haddington. Middle-aged divorcée, Eve Fletcher, is preparing for the departure of her 18-year-old son, Brendan, who will be attending the fictional Berkshire State University for college. Eve is disconcerted when she hears Brendan using misogynistic language towards his ex-girlfriend, but she does not have a chance to reprimand him. She drives him to BSU and bids him a tearful farewell. Brendan is excited to start college because he loves to drink and party, and BSU has a reputation as a party school. Eve works as an administrator at a local community center for senior citizens. With Brendan gone, Eve decides to take evening classes at the local community college. She takes a gender studies class taught by a transgender woman named Dr. Margo Fairchild. Eve greatly enjoys the class.

Eve feels lonely in Brendan’s absence and tries to find other ways to occupy her time. She finds that she has become fascinated by lesbian pornography, despite the fact that she has always considered herself straight. However, she becomes attracted to a young coworker named Amanda. Eve and Amanda get drinks together one evening, and Eve tries to kiss Amanda, but Amanda does not reciprocate. They are embarrassed but wish to remain friends. Meanwhile, Brendan is struggling at college. He is doing poorly in his classes, and he does not have the thriving social life he had imagined. Brendan attends a meeting of the Autism Awareness Network on campus because his half brother is autistic. Brendan also has a crush on a sophomore named Amber, who is in the group.

One evening, Eve goes to a bar with Margo Fairchild and some students from the gender studies class. Eve and Margo talk about the challenges and anxieties that Margo faces as a transgender woman. One person present is Julian Spitzer, who is in the gender studies class and who attended the same high school as Brendan. Julian becomes very intoxicated and Eve offers to drive him home. Julian drunkenly says that he is very attracted to Eve. At BSU, Brendan and Amber go on a date and eventually go to Amber’s dorm room. They have a sexual encounter, but when Brendan uses misogynistic language, Amber tells him to leave.

At the community center, Amanda organizes a presentation in which Margo will talk about her experience as being a transgender woman. Some of Eve’s classmates attend. The senior citizens do not respond well to the presentation. The response is mostly a mixture of disgust and confusion. Eve decides to invite Margo and Amanda and the classmates to her house for a party in order to emotionally decompress from the experience. Eventually, everyone leaves except for Amanda, Eve, and Julian, who then have a sexual encounter all together. Meanwhile, Brendan is struggling more than ever at BSU. He feels like a social outcast and his grades are quite bad. He eventually decides to go home to Haddington and drop out of BSU.

Amanda leaves her job at the community center, and Brendan comes back to Haddington to live with Eve again. Eve starts to receive sexually solicitous text messages from Julian. Julian says that he wants to have a sexual relationship with Eve. Eve is tempted, but in the end, she realizes how poor a decision this would be. Brendan starts to work as a plumber’s apprentice at a plumbing company run by a man named George Rafferty, although Brendan thinks that he might go back to college eventually. Eve and George begin dating, and eventually they marry one another.

More summaries and resources for teaching or studying Mrs. Fletcher.