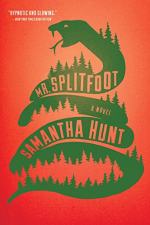 Samantha Hunt
This Study Guide consists of approximately 86 pages of chapter summaries, quotes, character analysis, themes, and more - everything you need to sharpen your knowledge of Mr. Splitfoot.

The following version of this book was used to create this study guide: Hunt, Samantha. Mr. Splitfoot. Houghton Mifflin Harcourt, 2016.

Samantha Hunt’s modern Gothic novel is a tale of mystery, intrigue, and conspiracy weaved between two braided narratives. Both narratives are told in chronological order, yet each takes place in a different chunk of time. The earlier story centers around an orphan named Ruth who is forced to live in a foster home with a religious fanatic named Father Arthur. The Father is a self-proclaimed religion expert, and he uses his time with the children to keep them in the dark ages. They are not allowed to leave the crumbling orphanage, they are forced to wear outdated uniforms, they tend to the garden and the chicken coup on a daily basis, and they attend religion courses every day. Father Arthur instructs the children about the dangers of every other religion out there, but is unable to pinpoint his own beliefs as anything but being based on the bible. Ruth finds comfort in two people. Her sister, Eleanor, enters the orphanage with her after they are taken away from their drunk and abusive mother. When El is forced to leave the orphanage at age eighteen, Ruth is only 5 and she is left to tend to herself. This solitary existence does not last long, though. Shortly after, another boy named Nat is abandoned by his mother when she chooses to run away with a man who does not like children. Nat’s willingness to display his anger through lighting things on fire leads him to Father Arthur’s strict and troubled orphanage, where he meets Ruth and finds a soul mate within the girl whom he shares a room with. Ruth and Nat refer to one another as sisters. They share a room, a bed, and their thoughts with one another. The two of them are inseparable and they depend greatly on the other to get them through their horrid time with Father Arthur.

One of their favorite activities with one another is to communicate with a being named Mr. Splitfoot, who provides a portal between Nat and dead people. Nat charges the other orphans small amounts of money to talk to their dead relatives, and Ruth is proud to know that her friend is able to talk to dead people. Ruth questions why Nat has never tried to speak with her dead mother. The two go down to the basement at Father Arthur’s orphanage, better known as Church of Christ!, and Nat attempts to speak with Ruth’s mother. While there, a salesman appears in the basement. He is squatting there until he has enough money to move on to the next town. He recognizes Nat as a conman and, after the salesman defines himself as a conman, he invites Nat and Ruth to meet with him in order to discuss a business proposal. The next day, Ruth and Nat venture into the nearest city, Troy, New York, to meet with the mysterious man. He introduces himself as Mr. Bell, a lifelong con artists and a master of his business. He offers to teach Nat how to con people better and asks to be their manager. Ruth is doubtful because she believes Nat to be a genuine talent in talking to dead people, but Nat quickly agrees to the business proposal. The three of them shake hands and develop a close bond based on making money through hosting phony séances.

Ruth tires of all the lies related to her business of hosting séances. She takes a short break and tries to find her sister, El. When Ruth finds Eleanor, she discovers that her sister was abandoned in Troy. El had sex with men in order to find a place to sleep, which left her pregnant. El was lost. She left Troy and moved in with their mother. Ruth is shocked to learn that her mother was alive when they became state wards. She is even more shocked to discover that it was her own mother who gave her the scar she has on her face. Ruth carries a chemical burn on her face, created when her own mother threw bleach on her face and passed out before she rinsed it off. Eleanor and Ruth became wards of the state after El reported this abuse. However, all of this information is new to Ruth, who returns to Mr. Bell and her life of giving fake séances with an empty feeling she did not feel before knowing this about her early childhood.

Ruth’s life changes drastically when she returns with a medical emergency. His appendix bursts, which lands her in the hospital for a few days. While recovering there, a man named Zeke appears at her bedside and visits with her. Shortly after, Zeke appears at Church of Christ! and offers Father Arthur $800 for Ruth’s hand in marriage. When Ruth realizes that marrying an adult means that she gets freedom from Father Arthur, she proposes marriage to two people: an orphan in the house who is about to turn eighteen and her business partner, Mr. Bell. Ruth marries Mr. Bell and moves out of Father Arthur’s home into an apartment in Troy with Nat. The three of them make money off of fake séances until they are caught by Zeke, who is bitter about Ruth’s decision not to marry him and rambling about Mr. Bell stealing money from them. The trio goes on the run and winds up at a mansion in the Adirondacks. It is here where Ruth discovers her affection for Mr. Bell. Mr. Bell reveals that Zeke, also known as Mardellion, is his father, and is the person who taught Mr. Bell how to con people. Mardellion is the leader of a cult that follows The Book of Ether. The mansion they find themselves at was the original site for the cult, and Mr. Bell returns to find a box of money that Mardellion and his father collected in all of their previous cons.

The second narrative in this novel takes place roughly fourteen years later. Eleanor’s daughter, Cora, is now an adult. She maintains happy memories of meeting her aunt Ruth once before, but she is heavy with regret for her current mundane life. Cora is impregnated by her boyfriend, Lord. Lord is upfront about the fact that he is love with his wife and that he could never fall in love with her. He tries to kill the baby when Cora reveals her pregnancy. Ruth appears at Cora’s home in a moment of crisis. Ruth is alone. She appears disheveled, troubled, and is unable to speak. She gestures a departure to Cora, who accepts the proposal due to her personal hatred of her living situation. Cora leaves with Ruth, and the two women venture out on a journey on foot that lasts much longer than Cora ever anticipated. Ruth leads Cora along the Erie Canal. They walk long enough for Cora to carry her baby to full term. Along the way, Cora learns how to like herself. She learns how to be on earth and she develops an understanding of her own priorities. Ruth leads Cora to the same mansion in Adirondacks where Mr. Bell once led them fourteen years ago. Ruth’s plan is revealed when she helps Cora find the same box of money Mr. Bell showed them many years ago. But Cora is shocked to find Nat in the mansion all alone, and she learns a lot more about her aunt than she ever anticipated.

More summaries and resources for teaching or studying Mr. Splitfoot.