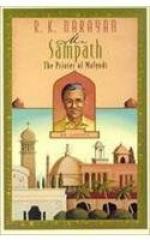 Related Topics
An Astrologer's Day
A Horse and Two Goats
Gods, Demons, and Others
Malgudi Days
Swami and Friends

R. K. Narayan
This Study Guide consists of approximately 42 pages of chapter summaries, quotes, character analysis, themes, and more - everything you need to sharpen your knowledge of Mr. Sampath.

This detailed literature summary also contains Quotes and a Free Quiz on Mr. Sampath: The Printer of Malgudi by R. K. Narayan.

The following version of this book was used to create this guide: Narayan, R.K. Mr. Sampath – The Printer of Malgudi. Everyman’s Library, 2006.

At the beginning of the novel, which is set in 1930s India, the protagonist Srinivas takes a train from his hometown of Talapur to Malgudi, the fictional town where author R.K. Narayan set his stories. While the rest of his family are professionals trained in law, Srinivas wants to do something more with his life. He has moved to Malgudi to start a political journal named The Banner.

Upon arriving in Malgudi, he rents a room in the house of an eccentric widower, who is never named. There, he gets to know another tenant named Ravi, a young man that Srinivas believes would make a great artist. Ravi is in love with a woman with whom he has never spoken, only seen. When Srinivas’s wife and son appear in Malgudi and move in with Srinivas, domestic tensions ensure.

Meanwhile, when a labor strike threatens to shut down The Banner’s production, Srinivas turns to a man named Sampath. Sampath helps him to print 500 copies in one night, just the two of them. However, the next day Sampath refuses to do the grueling process again. Instead, he involves them both in a film production venture. Sampath has found two investors for the project: Mr. Somu and Mr. Sohan Lal. Srinivas, who is working as the film’s script writer, and whom disagrees with their artistic vision, which tends to be more commercial.

Ravi, who is taken on as the film’s art director, falls in love with its leading lady, Shanti. Sampath is also courting Shanti. One day, on set, Ravi goes mad. On a rampage, he abducts Shanti, in the process destroying much of the set. In the end, the film falls apart and Srinivas decides to leave the project. The two men, Sampath and Srinivas, decide to part ways.

More summaries and resources for teaching or studying Mr. Sampath: The Printer of Malgudi.