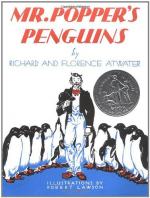 Richard and Florence Atwater
This Study Guide consists of approximately 27 pages of chapter summaries, quotes, character analysis, themes, and more - everything you need to sharpen your knowledge of Mr. Popper's Penguins.

The Love of Adventure

Mr. Popper is early on described as a lover of adventure, in contrast to his mundane existence as a house painter in the sleepy town of Stillwater. Though he does his job well, his thoughts wander to fantasies of climbing the Himalayas or exploring the Arctic. Mr. Popper is unfulfilled; there is a hole in him, despite his charmed home life and good job.

Mr. Popper gets his adventure in the form of Captain Cook the penguin. With Captain Cook, Mr. Popper is able to realize the adventure he thought could only occur in books or in exotic locations. He is able to turn his own home into an ice palace, of sorts, hosing down the floor and building a penguin habitat in his basement. He then embarks on a nationwide tour with his pets, leading to plenty of more adventures and mischief.