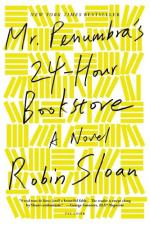 Robin Sloan
This Study Guide consists of approximately 41 pages of chapter summaries, quotes, character analysis, themes, and more - everything you need to sharpen your knowledge of Mr. Penumbra's 24-Hour Bookstore.

Clay Jannon is a recently unemployed, college graduate. He takes a job on the night shift of a mysterious bookstore called Mr. Penumbra’s 24-Hour Bookstore. He must log the comings and goings of all patrons and has been instructed not to look in any of the books. At the urging of his friend Mat, Clay does look in the books and learns that they’re written in some kind of code. He develops a 3D model of the bookstore, which contains the inventory. He meets Kat, an up-and-comer at Google, and they bond over the model and begin dating.

Clay inadvertently solves what’s known at the Founder’s Puzzle – the first obstacle a novice if the fellowship of the Unbroken Spine must complete. Penumbra, the eccentric owner of the bookstore, is unexpectedly pleased that Clay has looked in the books and solved the Founder’s Puzzle so quickly. When Penumbra learns that Clay solved the puzzle with the aid of a computer, he rushes off to meet with Corvina, the First Reader of the fellowship, and advocate for the use of computers in decoding the mystery of the Manutius codex vitae, which the fellowship has been trying to solve for 500 years. Corvina refuses, stating emphatically that the use of modern technology will nullify the result of solving decoding the book as it is thought to be the key to achieving immortality.

Not easily dissuaded, Penumbra, Clay, Kat, and Clay’s best friend Neel embark to solve the puzzle. Kat enlists the aid of Google and Clay sneaks into the Reading Room, a secretive, underground library where Manutius’ codex vitae is kept. He scans the pages of the Manutius and also scans Penumbra’s codex vitae. He is nearly found out, but saved from discovery by Edgar Deckle. With the scans from the pages entered into the computer, Kat begins the Great Decoding. Much to her humiliation, the decoding fails and it results in her relationship with Clay fading.

Penumbra, equally humiliated, has disappeared. Clay tries to find him to no avail. When he finally reaches out to Deckle, Deckle explains that while he knows where Penumbra is, he won’t tell Clay until Clay is able to locate the original Gerritszoon punches that were stolen and disappeared years earlier. With the help of Oliver, the other bookstore clerk, and Oliver’s friend Tabitha, Clay is able to get a lead on where the punches may have ended up. He travels alone to Nevada to collect the punches from an off-site storage facility in the dessert. As he travels back to San Francisco, he notices something in the audio version of his favorite book: The Dragon-Song Chronicles. He learns that Moffat, the author, was a member of the fellowship and published his codex vitae as the third volume of the Chronicles. Clay discovers a clue to lead him to finding how to decipher the code. Clay decodes the Manutius codex vitae and presents it to his friends and the fellowship.

Penumbra comes out hiding. Clay reveals that the codex vitae lacks the key to immortality, but rather reveals that friendship is the truest gift. Corvina is stripped of his duties as First Reader and Deckle takes his place. Clay and Kat rekindle their relationship and Clay and Penumbra embark on a new business venture.