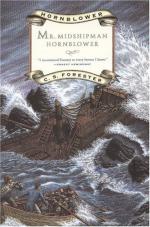 C. S. Forester
This Study Guide consists of approximately 55 pages of chapter summaries, quotes, character analysis, themes, and more - everything you need to sharpen your knowledge of Mr. Midshipman Hornblower.

Horatio Hornblower joins the British Navy as a midshipman at the somewhat advanced age of seventeen during 1793. He serves briefly aboard Justinian in an unhappy assignment and then transfers to Indefatigable where he has several incredible experiences and learns much. In 1796, he makes an audacious and successful attack on a Spanish galley and is made acting-lieutenant. In early 1797 he is captured and spends the next two years in a Spanish prison. He is released following a courageous rescue of Spanish seamen.

The novel opens with Hornblower as a tyro midshipman posted to HMS Justinian. He enters the service entirely ignorant, without any qualification, and seasick. His initial period of service—perhaps a few months in duration—is marked by misery and abuse without any real purpose. Hornblower is the butt of jokes amongst the established crew and the particular object of abuse of a failed midshipman named Simpson. Hornblower finds the situation untenable and erroneously concludes that suicide or death would be preferable. The naivety of youth leads him to engage Simpson in a duel. Hornblower intellectualizes the danger and calculates the odds, insisting on a peculiar form of duel to maximize his chances of success. The ship's captain intervenes secretly to prevent any harm to both participants and then transfers Hornblower to a frigate—not as punishment, but in effect to allow Hornblower an escape from the situation.

Within just a few months Hornblower has developed remarkably as a seaman—so much so, in fact, that he is placed in independent command of a prize. The situation is somewhat unfortunate, though, as the prize brig has sustained serious but unapparent damage and, within a few days, sinks. Hornblower goes through a period of self-recriminating introspection but finally moves on. He then leads a successful military operation in which he is directly responsible for the loss of at least one life. Once again, he subjects himself to a finite period of self-recriminating introspection. Hornblower thereafter takes a broader view of those he serves with and uses his newfound insight into humanity to save another shipmate from nearly certain death.

Hornblower then experiences several of the most distasteful aspects of warfare. He goes ashore in support of an attack on a French town and witnesses the collapse of military defenses due to an earlier focus on retributive executions. In the ensuing rout, he sees much needless loss of life and concludes ultimately that the entire military misadventure was an unfortunate and needless case of suffering shared among thousands. His next adventure finds him aboard a ship rowed by slaves chained to the oars and commanded by a whip-wielding enforcer. Hornblower has a visceral response to the slave ship and nearly single-handedly boards her, attacks the crew, and captures the ship.

Hornblower then moves on to acts of distasteful but necessary service in the navy. After nearly botching his examination for lieutenant, Hornblower boards a fire ship and in great personal danger steers it away from the British fleet and onto a deserted stretch of beach. His next adventure finds him in quarantine but commanding a supply brig full of much-needed food. His final adventure finds him in detached command of a dispatch cutter which is captured. Making some fast but appropriate decisions, Hornblower protects the dispatches and is then hauled off to a Spanish prison where he spends two years. He eventually engages in a profoundly dangerous rescue operation to save some Spanish sailors. His personal bravery and service result in his release from prison, and the narrative concludes at that poin.