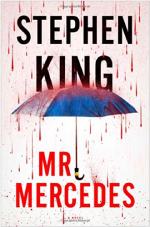 NOTE: All citations in this Study Guide refer to the Kindle version of Mr. Mercedes, published June 3, 2014.

A retired police detective, a teenage black boy, and a neurotic woman team up to form an unlikely group of heroes who stop a killer known as Mr. Mercedes from detonating a bomb during a sold out pop concert in this novel by Stephen King. Mr. Mercedes is the first installment in the Bill Hodges trilogy. This novel follows the escapades of Hodges, a retired police officer who is not yet ready to give up on solving the City Center Massacre, a case he handled while on active duty.

Not long after retiring from his job as a detective, Bill Hodges gets a letter from a man claiming to be the Mercedes Killer. The caller, whom the reader knows is Brady Hartsfield, goaded Olivia Trelawney, a woman from whom he stole a car he used to kill eight people at a job fair, into committing suicide. He is setting his sights on Hodges, hoping to push him into suicide as well because Hodges was the lead detective on the case of the City Center Massacre. Instead of becoming suicidal, Hodges takes a new interest in catching Mr. Mercedes. He first questions Janelle “Janey” Patterson about Olivia’s death and learns that Olivia received a letter from Mr. Mercedes as well. Janey believes the man toyed with her sister until she committed suicide. She joins Hodges in his search for Mr. Mercedes.

Meanwhile, Brady Hartsfield has begun communicating with Hodges through an internet website. Through his messages, Hodges gets Brady riled up with taunts that Brady is not the real Mercedes Killer. Brady decides to retaliate by killing the dog of one of Hodges’ friends with poisoned hamburger meat. Before he can get the meat to the dog, however, Brady’s mother makes lunch with the hamburger and dies. In retaliation Brady sends Hodges a message saying he will kill him.

Brady plants a bomb in Hodges’ car which would have killed him if Hodges had been driving the car when the bomb was detonated. Instead, Janey is killed in the blast. Her death makes Hodges even more determined to track down the man he still knows only as the Mercedes Killer. Meanwhile, Hodges teams up with Jerome, a computer whiz teen, and Holly, Janey’s cousin who suffers from mental illness but is also a computer genius, to help him uncover Mr. Mercedes’ identity.

Things move fast once Hodges, Jerome, and Holly learn that the killer is Brady, the same man who works as the ice cream man in Hodges’ and Jerome’s neighborhood. They are able to hack into Brady’s computers and learn he plans to detonate a bomb during that evening’s pop concert at the city’s arts complex. Nearly 4,000 people will be in attendance, including Jerome’s sister and mother.

Hodges, Jerome, and Holly arrive at the concert hall just as the music starts. Hodges recognizes the shoulder pain he has been experiencing is the sign of a heart attack and sends Holly and Jerome to subdue Brady. It is the neurotic and insecure Holly who stops Brady’s plan by hitting him in the head with Hodges’ Happy Slapper, a homemade weapon consisting of ball bearings in a sock.