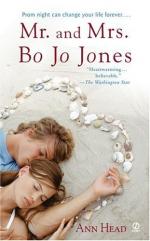 Ann Head
This Study Guide consists of approximately 35 pages of chapter summaries, quotes, character analysis, themes, and more - everything you need to sharpen your knowledge of Mr. and Mrs. Bo Jo Jones.

This detailed literature summary also contains Topics for Discussion and a Free Quiz on Mr. and Mrs. Bo Jo Jones by Ann Head.

Mr. and Mrs. Bo Jo Jones is a realistic novel from the late 60s which recounts, in first-person perspective, the events and hardships in the life of a pregnant teen, July Greher, and her teen husband, Bo Jo Jones.

July is a carefree high schooler who enjoys eating hamburgers and shakes or going to clubs on the weekends with her usual gang of friends. Her steady boyfriend is Bo Jo, and during a night of passion on the beach, the couple has sex. Both are ashamed and frightened because of the stigma attached to pre-marital sex and its consequences.

July, under an assumed name, goes to a doctor in another town and learns that she is pregnant, a devastating pronouncement. She talks to Bo Jo, and he thinks the manly and responsible thing to do is to get married. They do so three days later, again in another town under assumed identities.

Both sets of parents are furious and heartbroken when they hear the news, with Bo Jo's parents threatening to disown him. July's parents simply want to make it go away, and they feel July should carry the baby to term, have it adopted, and get the wedding annulled. Bo Jo and July don't think it is that simple, and fight to have their own voice and decision heard in regards to their marriage. July's parents force the young couple to endure an additional marriage ceremony to save face in the community.

July's father offers Bo Jo a job at his bank, and July's mother arranges a small apartment for the couple. July and Bo Jo hesitantly accept. Marriage turns out to be a vast and usually unhappy change. Bo Jo has to give up school for the job, and July has given up school as well. Things don't feel the same with their old high school chums, and July gets cabin fever cooped up all day in her new domestic life.

Eventually, after months of making ends meet, arguments, hard feelings and heartache, July hemorrhages and must have the baby early via C-section. The baby is born, whom she names Jonathan. But soon after the premature baby has trouble breathing, and the next day, July learns the baby is dead, an occasion for heartache and tears once more.

Both sets of parents come together after July comes home from the hospital, agreeing that, while tragic, the absence of a baby means a "second chance" for the teens to become carefree again and pursue their own interests (school). In short, they want them to divorce and go their separate ways. Under great pressure, Bo Jo and July decide they should divorce. However, days later, they meet again and decide they have feelings for each other, and a relationship just getting going shouldn't end in divorce. They reach a compromise where Bo Jo finishes school and July works to help support him during school. Three years later, the marriage is still strong and perhaps better than ever.