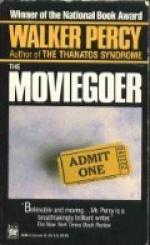 Walker Percy
This Study Guide consists of approximately 39 pages of chapter summaries, quotes, character analysis, themes, and more - everything you need to sharpen your knowledge of The Moviegoer.

The Moviegoer Summary & Study Guide includes comprehensive information and analysis to help you understand the book. This study guide contains the following sections:

This detailed literature summary also contains Related Titles and a Free Quiz on The Moviegoer by Walker Percy.

The main character of this novel is John Bolling, who also goes by a number of nicknames given to him by his friends, family and colleagues. Despite the familiarity with which his friends and family members communicate with him, John is essentially an outsider with few true friends and an unclear purpose in his life. He enjoys going to the movies and prefers his career as a financial investor, but these pastimes do not satisfy his family, in particular his Aunt Emily.

Aunt Emily is the mother figure in John's life, although his own mother is still alive. His mother has remarried and has a number of children now, however, and Aunt Emily is the family member that focuses on John, hoping to give him the heritage of the Bolling name. Aunt Emily often talks with John about the virtues of living a life of justice and nobility, giving back to society and making it a better life to live for all. John, however, is uninspired by the thought of contributing to society and rejects living a life that was preordained from him, although he never argues with Aunt Emily nor with anyone else around him. Instead, he avoids the topics politely. He instead sees a possibility to search for the meaning of life, although he never actively pursues this quest.

John's cousin Kate, on the other hand, also actively rejects the life of a Southern woman that has already been prescribed for her. However, Kate is more forthright about her rejection of these boundaries through her depression. Although she is not suicidal, the idea of being a stereotypical Southern wife with all of its constraints makes her take prescription drugs (and nearly overdoses on them) and attend therapy with various doctors. She says that she feels her best when she's around John because he is the same type of person that she is, although no one acknowledges it nor do Kate and John even discuss it. She eventually agrees to marry John solely on the promise that he will dictate her every action, down to the smallest detail, and not laugh at her. In this way, she can get rid of the responsibility of the prescribed life and put her life in the hands of a man she knows rejects the constraints of Southern culture as well.

Interestingly, after a failed business trip to Chicago with Kate, John lands in trouble with Aunt Emily. Kate is her stepdaughter and the night after Kate takes a few too many sleeping pills to numb herself, John whisks Kate away to Chicago at Kate's request. Unfortunately, however, neither one of them think to let Aunt Emily or the rest of the family know, causing them to worry and fret about her. They cut their trip in Chicago short, despite Kate's good mood, and return to New Orleans, where Kate immediately sinks into her depression again.

Aunt Emily is thoroughly disappointed in John and she lectures him severely on both his most recent actions with Kate and his life in general. John turns 30 on the day they return from Chicago and after Aunt Emily's lecture, gives up the possibility of searching for the meaning of life. Instead, he commits himself to going to medical school, despite having absolutely no passion for it. Kate and John get married and both regain Aunt Emily's favor. In the end, both John and Kate are forced into the lives that were prescribed to them by their society and family members, unable to escape perhaps from a lack of motivation and feeling of apathy they both carry.

More summaries and resources for teaching or studying The Moviegoer.

The Moviegoer from BookRags. (c)2022 BookRags, Inc. All rights reserved.