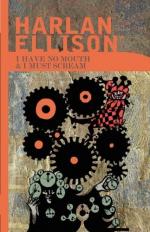 I Have No Mouth, and I Must Scream Characters

Although not human, the computer, which calls itself AM, is perhaps the main character in the story. Originally, AM was one of several national computers designed to fight wars for the nation that owned it. Eventually, the computers learned to link themselves to each other, forming one supercomputer. When this supercomputer awoke, or became sentient, it called itself AM. AM hates all human beings, according to Ted, because "We had created it to think, but there was nothing it could do with that creativity." AM killed all the humans on the face of the Earth, save five. Then AM brought the humans inside itself and created a hellish world for them in which it could torture and torment the survivors, but not let them die. During the story, AM plays with each of the survivors in turn, seemingly enjoying their pain and suffering.

One of the survivors...