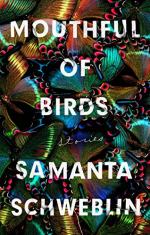 This detailed literature summary also contains Quotes and a Free Quiz on Mouthful of Birds by Samanta Schweblin.

The following version of this book was used to create the guide: Schweblin, Samantha. Mouthful of Birds. Oneworld Publications, 2019.

Schweblin opens her collection of short stories with the story, Headlights, a story with a strong sense of feminist rage. Felicity has been dropped off in a field by her new husband and converses with Nené, another woman who has been left behind. Nené explains that the rest of the women left here have experienced the same fate and all they do now is cry. Another woman is left on the highway, confused and disappointed. Suddenly, the “black mass in the dark fields” begins to move closer to the group (9). The old man becomes frightened, and Felicity grabs her hand. New headlights appear and the women run towards the car. A man is left on the side of the road and the group drives off. Suddenly, lights appear that belong to the husbands that left them, and Nené explains that they are “coming back for [the man]” (13).

In Preserves, Schweblin explores the difficult news of a young couple who is pregnant. The narrator wishes that the baby would have come at a different time, and as a result, seeks the help of a doctor who prescribes treatment. His treatment requires changes in “diet and sleeping patterns, breathing exercises [and] medicine” (18). After months of treatment, the narrator’s belly goes back to normal. On “the day,” the narrator begins to feel nauseous and is given a jar to spit out her now almond-sized baby, Teresita, into (122).

In Mouthful of Birds, the title story, a father is confronted by his daughter Sara’s new appetite, eating birds. His wife forces him to take Sara home, and the narrator appears only able to repeat “you eat birds” (35). While staying with her father, Sara appears to be extremely healthy; it is only when her mother becomes ill and cannot deliver birds to the house that Sara starts to deteriorate. The narrator tries to call his wife, but when she does not answer, he drives to the pet store and asks for a small bird. When he returns home, he places the box with the bird on Sara’s desk and leaves the room. As soon as he hears the sink turn on, he begins to feel better.

In the story Irman, two truck drivers stop at a roadside restaurant for a break. An extremely small man fails to get them their order because, as he explains, his wife is on the floor and he cannot open the fridge. Oliver and the narrator go back to the kitchen, and the small man confesses that he thinks she is dead. The small man insists that he cannot work without help, and even offers Oliver $500 a week to work. When Oliver questions his finances, the small man becomes angry, insisting “my money is none of your business” (69). Oliver grabs the small man and demands to have his money. When the small man retreats and returns with a gun, the two men run, grabbing a small wooden box. While driving, they discover that the box contains letters and poems, and Oliver throws the box out the window.

In Toward Happy Civilization, Gruner is stuck at a train station, unable to buy a ticket to the capital. He is taken in by Pe and Fe who house him as if he was a part of the family. Quickly, he realizes that the “euphoric familial love” is merely a “farce,” and he plots his escape with the other workers (93). While Fe is gardening, the group puts sleeping pills into Fe’s coffee, ensuring that there will be a non-signal when the train passes. As it pulls into the station, the train unloads dozens of happy people announcing, “I thought we’d never get off” (98). On their way to the capital, however, the group worries that “there will be nothing left” when they reach the capital (100).

In My Brother Walter, the narrator describes the strange relationship his family has with his brother Walter who is severely depressed. As his Aunt Claris describes, it appears that “the more depressed Walter is, the happier people around him feel” (118). Throughout the story, as the other members in the family becomes happier and more successful, Walter continues to be depressed. However, the narrator experiences a strange moment between Walter and his son, when he describes that he feels “like we could die” and he “can’t stop thinking about what’s wrong with Walter” (122).

In A Great Effort, a man struggles with his relationship with his father. As he struggles with a dream where he and his father are “a yellow animal, a single animal looking at itself in the mirror,” he begins to see Mrs. Linn, a massage therapist (189). As a child, his father routinely tried to leave home, but was always unable to stay away. One day, he sees Mrs. Linn after a scary incident with his son and a puppet show, in which he felt as though he could “no longer live with him, or without him” (196-197). He got his father and drove to Mrs. Linn who did her work on the narrator’s father.

In the final story in Schweblin’s collection, Benavides shows up to Dr. Corrales’ house with a suitcase that stores his murdered wife. When he shows Dr. Corrales the corpses, he tells Benavides that “it’s wonderful…genius, truly beautiful,” and introduces Benavides to Donor who will help him with “the work” (213). Donorio assures Benavides that he will be “rich, famous,” but Benavides can only moan “my wife” and “I killed her” (216). Benavides continues to try to make Dr. Corrales and Donorio understand his guilt as the two men prepare for the showing of “the work.” At the opening, Donorio passes the microphone to Benavides who announces to the audience, “I killed her” (226). The work is revealed and the audience goes mad, shouting praises for the work and Benavides retreats indoors.