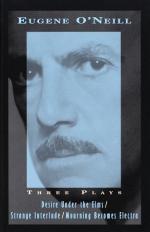 Mourning Becomes Electra is considered O'Neill's most ambitious work. In the play, he adapts the Greek tragic myth Oresteia to nineteenth-century New England. Generally, critics praised the play as one of O'Neill's best. Even though performances ran almost six hours long, audiences seemed to agree; it ran for 150 performances.

Like Oresteia, O'Neill's play features themes of fate, revenge, hubris, adultery, and honor. Many critics note that the play reflects his recurring concerns about the unsuccessful struggle of an individual to escape a tragic fate and the dark nature of human existence. The play is structured as a trilogy, with three different plays The Homecoming, The Hunted, The Haunted comprising the story.