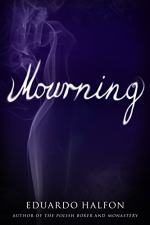 In pages 99 - 127 of "Mourning," Eduardo recounts the story of his Polish grandfather's younger brother, also named Salomón, whose death he does not discover death until visiting Łódź. Recalling once again the events of one particular Yom Kippur, Eduardo remembers his grandfather reading aloud the names of the dead. Eduardo's father explains the recitations are a prayer to honor their memory. When Eduardo tries asking about drowned Uncle Salomón, his father feigns ignorance.

While talking with Don Isidoro at the lake house in the narrative present, Eduardo thinks about his father's textile factory in Florida. He remembers a day visiting the factory with his mother. In the car he mentions Uncle Salomón's death by drowning. His mother tells him Salomón died as a boy in New York.