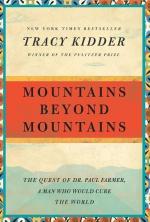 Related Topics
Strength in What Remains

Tracy Kidder
This Study Guide consists of approximately 34 pages of chapter summaries, quotes, character analysis, themes, and more - everything you need to sharpen your knowledge of Mountains Beyond Mountains.

This detailed literature summary also contains Topics for Discussion and a Free Quiz on Mountains Beyond Mountains by Tracy Kidder.

Mountains beyond Mountains is the story of Dr. Paul Farmer as told through the author, Tracy Kidder. Kidder shadows Dr. Farmer with his patients, records his stories, and forms a chronology of Dr. Farmer's many achievements. Paul Farmer was born in 1959 and raised in a middle class American household. His father was a hard worker and loved Paul but wasn't the type to proclaim his feelings. Paul's mother stayed home when their children were young and eventually went back to school to earn her bachelor's degree. Paul and his siblings (there were a total of six children) were raised in Massachusetts, Alabama, and in Florida in what ranged from a traditional home to a bus and, at one point, a boat. The Farmer family wasn't poor in a third world sense, but money was definitely tight. Life was an adventure. Paul graduated from high school and attended Duke University on a full scholarship. He volunteered in Haiti at various clinics and set his sights on medical school. Paul was accepted at Harvard Medical School and graduated from there with his M.D. and also a Ph.D. in anthropology. The blend of medicine and anthropology guided his life in the years that followed.

Farmer is an American doctor and worldwide health activist. He believes strongly in the right of all individuals to have access to adequate health care. It is Paul's mission to make this possible in even the most rural areas. He chose Haiti as his primary point of aid, but he is also associated with efforts in other parts of the world through the charity he established, Partners in Health. Partners in Health is situated in Boston, Massachusetts. It has sister organizations in Haiti and Peru called Zanmi Lasante and Socios en Salud, respectively. Dr. Farmer chose these locations due to their extreme levels of poverty and inadequate health care. They have exceptionally high rates of infant mortality, malnutrition, tuberculosis, HIV, and AIDS. Dr. Farmer's associate, Jim Kim, designed, built, and oversees the operation of Socios en Salud. Dr. Farmer prefers to attend to his patients in Haiti but accepts speaking engagements and teaching positions to speak on behalf of the people he treats and to spread awareness of the conditions they face. Dr. Kim trained at Harvard with Paul, and they are both responsible for clinical time at Brigham and Women's Hospital, but Jim's specialty lies in policy making and advocacy.

Mountains Beyond Mountains traces Dr. Farmer's struggle to establish quality health care in lands devastated by loss of agriculture, political turmoil, and poor finances. Paul spent more than twenty years creating health clinics, schools, and homes for destitute people. Along the way he made many friends, both in the United States and abroad. He influenced the prestigious World Health Organization and battled for better tuberculosis treatment protocols. The world would benefit from following his example—the medical records of his patients at Zanmi Lasante prove that his methods are successful.

More summaries and resources for teaching or studying Mountains Beyond Mountains.