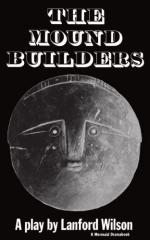 Additional Resources for The Mound Builders by Lanford Wilson

This biography provides the best introduction to Wilson's life and work. In a full chapter devoted to The Mound Builders, Barnett examines the play's plot, structure, and major characters and discusses the play's origins as two imagined scenes in the writer's mind.

Twelve critical articles, an introduction, a chronology, and an annotated bibliography of primary and secondary works comprise this volume. While The Mound Builders is mentioned only briefly, interviews that Bryer conducted with Wilson and his collaborator Marshall Mason illuminate Wilson's creative process.

This brief monograph focuses on Wilson's family history as it has influenced his writing. Busby treats The Mound Builders, Wilson's first play set in the Midwest, as an important stepping stone toward the playwright's Talley family plays—his greatest works...