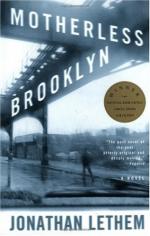 Motherless Brooklyn is at once a traditional detective story and a playful send-up of many elements and tropes common to the genre. The first indication that this is the case is the unconventional aspect its narrator, Lionel Essrog, brings to the table. He introduces himself to open the book with a description of his particular ‘quirk,’ which is a fairly severe case of Tourette’s syndrome, which causes him to compulsively blurt out frequently obscene and inappropriate words as well as to compulsively touch those with whom he comes into contact. The necessity of curbing and harnessing these impulses is among the principle struggles that Lionel engages in throughout the novel.

More externally, Lionel is engaged in getting to the bottom of the mystery of the disappearance of his mentor and employer, Frank Minna, a savvy street hood who adopted Lionel and several others from St. Vincent’s Home for Boys, an orphanage in Brooklyn, folding them into a group of livery cab drivers-cum-operatives referred to as Minna Men. It is this rag-tag group, which Lionel deals with on a daily basis, and they provide the novel with its title.

Lionel’s tics cast him as an outsider of sorts, and he is viewed by other characters throughout the novel as being deficient in one way or another as a result of his condition. It is this degree of removal from the other characters that simultaneously poses a challenge in his quest for information and offers him an opportunity to gain access to sources. It also allows for some opportunities for amusing wordplay on Lethem’s part.

Throughout Lionel’s journey to make sense of how things have come to be this way--his mentor gone, his life seemingly without guidance, a constant sense of danger imperiling his heretofore steady life--he is brought into contact with an array of characters and character types who serve both to advance and reveal a plot that is at once little more than standard hard-boiled detective fare, but also, a perverse inversion of that genre. He deals with a femme fatale as well as an apparently hapless innocent, an exotic heavy who provides physical menace in every scene in which he appears, double crossers, informants, and the like abound. And yet, for as much as this book is a by-the-numbers example of the standard private detective yarn, it nevertheless seldom fails to take an opportunity to turn each and every one of these elements upside-down or inside-out. Just as Lionel cannot resist doing so with the words he hears and reads, so too, it seems, does Lethem feel compelled to invert and subvert the conventions of the genre in which he is working.