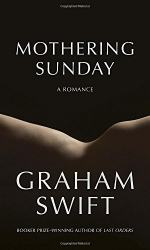 Mothering Sunday is the story of Jane Fairchild, an orphan who started working for the Niven family as a maid. As the novel opens, Jane and Paul Sheringham, the remaining son of three boys, talked about how the family once had a thoroughbred. Jane and Paul had been involved in a sexual relationship since they were teenagers. Now in their early twenties, Paul has arranged for Jane to meet him at Upleigh and for the first time they had sex in his bedroom. It was Mothering Sunday and Jane had the day off. Paul was supposed to go to a luncheon with his fiancée’s family, the Nivens, and his own parents. As they lounged naked together, Paul did not seem to be in a hurry to get to the luncheon.

Before she left for her day off, Jane got a phone call from Paul, which she attributed to a wrong number. She rode her bike to Upleigh and met Paul at the front door. This was the first time she had entered the front door at Upleigh, instead of the through the back servant’s entrance and they made their way upstairs to the bedroom. Afterwards, Jane watched Paul as he idled instead of getting dressed. She thought about how different it would have been if Paul had snuck away with Emma, his fiancée.

Jane wanted Paul to notice her as she remained on the bed. When he finally dressed to go, she told him that he looked handsome, despite the fact that he had never once called her beautiful--instead telling her that she was his friend. Paul left the house, permitting Jane to linger in the house, eat the leftovers in the kitchen, and see herself out using the spare key hidden under a rock out front.

Jane wandered the house in the nude, inspecting parts of the library and kitchen. She saw a picture of the two brothers Paul lost during World War I; the Niven family also lost two sons in the war. After she ate the leftovers in the kitchen, she heard the phone ring. It startled her and she returned upstairs to dress and leave. Before she left, she did not close the bedroom window.

After an exuberating bicycle ride home, Jane arrived to find Mr. Niven catching her in the driveway. He told her that earlier in the afternoon, Paul had been killed in a car accident. While the rest of the family went to be with Emma, Mr. Niven thought it best that he go to Upleigh to inform the staff and to check the status of the house. Visibly shocked at the news, Jane agreed to go with Mr. Niven to Upleigh. Upon their arrival, Ethel, the Upleigh maid, greeted then at the door. On her way up to the door, Jane noticed that the bedroom window had been closed.

With a recommendation from Mr. Niven, Jane ended up working at a bookshop at Oxford where she met her husband. Jane married Donald Campion, but their marriage was cut short when Donald died of a brain tumor.

Jane became a famous author at the age of forty-eight. During interviews, she would often think of how her affair with Paul would influence her answers to the questions. Jane never told anyone about her relationship with Paul, keeping her secret until her death at aged ninety-eight.