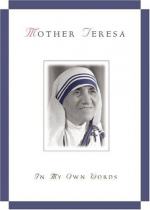 Mother Teresa, in My Own Words Summary & Study Guide

Mother Teresa
This Study Guide consists of approximately 21 pages of chapter summaries, quotes, character analysis, themes, and more - everything you need to sharpen your knowledge of Mother Teresa, in My Own Words.

Mother Teresa, in My Own Words Summary & Study Guide Description

Mother Teresa, in My Own Words Summary & Study Guide includes comprehensive information and analysis to help you understand the book. This study guide contains the following sections:

This detailed literature summary also contains Topics for Discussion and a Free Quiz on Mother Teresa, in My Own Words by Mother Teresa.

Mother Teresa: In My Own Words is a compilation of stories and aphorisms from the famed late 20th century nun, Mother Teresa, widely known for her extraordinary efforts to help the poor in Calcutta, India. Mother Teresa rose to global prominence and her efforts led to her being awarded the Nobel Peace Prize.

Mother Teresa did not write her own books or articles. The editor of the book speculates that this was because Mother Teresa was so focused on the activity that Christ required rather than mere writing. She was constantly busy helping the weakest of the weak, the sick, the dying and the abandoned. Mother Teresa did not speak often, but the words she spoke were considered powerful enough by her co-workers, sisters and others that the editor was able to compile them into a book.

Mother Teresa's birth name is Agnes Bojakhiu; she was born in Skoplje, Albanian in 1910 and lived until 1997. Inspired early in life to a religious vocation, she joined the Sisters of Our Lady of Loreto because she wanted to help the abused and abandoned daughters of the rich and poor. But her order sent her to Calcutta in 1929 to begin her novitiate. In 1937, she became a full nun and took the name, Teresa.

As the years moved forward, Teresa felt called to live among the poor and help them. In 1948 she moved to the slums of Calcutta to do just this. She founded a new religious order known as the Missionaries of Charity, which started working with abandoned children. Teresa would later open a Home for the Dying, and other groups would start up around her own, such as the Missonary Brothers of Charity. Due to her work, Mother Teresa would be awarded the Nobel Peace Prize in 1979.

The book is comprised of an introduction and fifteen short chapters. Again, these chapters are not written by Teresa but are transcripts of her words and recollections. As a result, the chapters are comprised of brief stretches of text followed by breaks. There is no continuous text. Each chapter covers a general topic but does not engage in a sustained treatment of any one issue.

The introduction is written by the editor of the book, Jose Luis Gonzalez-Balado, who merely tells the story of Teresa's life and gives context for the various aphorisms and anecdotes in the book. The chapters cover the following general topics: holiness, prayer, generosity, Christ in the poor, love, home and family, virtues, Mary, life and death, smiles, money, suffering, loneliness, God and Christianity and the mission of the Missionaries of Charity. Common themes include the idea that God is present in the suffering of the poor, that spiritual poverty is often worse than material poverty, and that giving to others is not a net cost but a net benefit.

More summaries and resources for teaching or studying Mother Teresa, in My Own Words.

Mother Teresa, in My Own Words from BookRags. (c)2022 BookRags, Inc. All rights reserved.