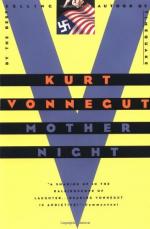 This detailed literature summary also contains Topics for Discussion and a Free Quiz on Mother Night by Kurt Vonnegut.

Mother Night is a first-person narrative accounting the events in the life of Howard W. Campbell, Jr., who was a spy during WWII. Campbell is an American by birth, but made a name for himself as a writer in Germany. When World War II breaks out, Campbell chooses to stay behind in Germany and gets recruited by the Nazis to spread their propaganda, and he gets recruited by the United States to be a spy and send out messages through his propaganda. He is eventually put on trial in Israel for war crimes due to his participation during the war. This is the story of how a well-intentioned man recruited as an American spy becomes regarded as one of the most notorious Nazi propaganda machines.

The narrator, Howard W. Campbell, Jr., is asked to enter into the record a written account of his experience as a propaganda agent for the Nazis. As he sits in his jail cell, he starts to write what he remembers. He was born in New York in 1912 and eventually moved to Germany with his family. He married a nice German actress named Helga, and when the war broke out, his family left Germany, but he chose to stay there with Helga and her family. The narrator earned money during the war by serving as a broadcaster and writer of Nazi propaganda to the English-speaking world.

He is recruited by an agent of the U.S. government to become a spy for the Allied forces. He accepts the position and begins sending out coded messages in his broadcasts. This goes on until the end of the war. During the war, Helga begins entertaining the troops, and she is killed by an attack while she is performing.

At the end of the war, when the narrator is caught, he is released almost immediately and goes into hiding in New York City. His life is void of meaning and he spends most of his time inside the small attic he rents. Eventually, he meets his neighbor, George Kraft, and they help each other start living life again little by little. One day he discovers that a newspaper has done an article about him, praising him for his good work spreading the truth during the war, and they also published the address where he is living. He also got a piece of mail from the man who captured him after the war. In the letter, the man tells the narrator to expect a visit from him.

The publisher of the newspaper that revealed his address pays the narrator a visit. The publisher comes bearing a gift for the narrator. It is his long lost wife, Helga. They get reacquainted and everything seems like life could be back to the way it was. Then Helga breaks the news that she is not really Helga. She is Resi, Helga's younger sister. Nevertheless, the narrator accepts her for who she is any they carry on their love affair.

Soon, new spreads of the narrator's location and that he is indeed alive. He starts to get a lot of mail and he sees a newspaper article that says Israel is trying to get him over there so he can be tried for war crimes. Things are getting serious and they plan to escape to another country. When their escape plans are compromised, the narrator is saved by the secret agent who originally recruited him. The narrator finds out that Resi is a Russian spy, and she is arrested along with his best friend, who also turns out to be a Russian spy.

Nothing in the narrator's world appears to be real. The only thing he had was his love for Helga and his love for Resi. With that gone, he feels there is nothing left. The narrator has a moment of clarity and he decides that he needs to stop running and face what he has done in his life. He turns himself in and he is transported to Israel to await trial.

As he waits for the trial to start, the narrator chronicles the events of his life for the historical record. Then, when he least expects it, the American agent who recruited him comes out of hiding to support his innocence and he sends a letter detailing how the narrator acted as a spy to help the Allied forces. That would be what he needed to aid his defense at trial. The narrator finishes up the story detailing his life and then he comes to the realization that he will always be remembered as the Nazi propagandist. He longs to be free and leave this life of hiding and being trapped behind him. He knows he has to take responsibility for what he has done. He decides the only way to be truly free is to end it all.