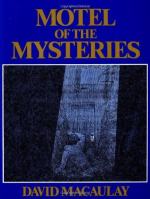 Motel of the Mysteries Summary & Study Guide includes comprehensive information and analysis to help you understand the book. This study guide contains the following sections:

This detailed literature summary also contains Topics for Discussion and a Free Quiz on Motel of the Mysteries by David Macaulay.

The Motel of the Mysteries is a satirical look at archeology and history. David Macaulay incorporates his writing and illustration in a look at the convoluted history of twentieth century Americans. It is the year 4022 and all research previously done concerning the North American continent has done little to uncover the secrets of the waste covered overgrown vegetation that is now the USA, Canada and Mexico.

It is guessed that in 1985 a drastic reduction in postal rates caused fliers, mail pieces and brochures to fall down on the Northern Continent and destroy all life. Some historians have ventured to Usa and uncovered a few secrets of the continent. To the people of the future, highway signs are not marketing for various businesses. Instead they are symbols of different religions and religious sects. The higher the sign, the closer the religion was to getting close with their gods.

Macaulay then describes the discovery of the Motel of the Mysteries and Tomb 26. Howard Carson an amateur historian and archaeologist who has dabbled in some experiments. He decides to go on a marathon through Usa. After falling behind the rest of the pack, Carson stumbles upon an excavation site by falling through a weak patch of ground. He recognizes what he finds as a tomb he had seen mentioned in a recent National Geographic. Carson decides to bring back Harriet, his partner, and a group of volunteers to uncover the treasures of Tomb 26.

While excavating. the group finds what would have been a late 1980's hotel room. Instead they mistake it for a burial chamber. They uncover what they believe is a Great Altar (television and TV stand), the Sacred Communicator (remote), the Internal Component Enclosure (ICE container), the Ceremonial Headdress (shower cap), the Sacred Urn (toilet), the Headband (Sanitized for your protection sticker), sarcophagus (bathroom), the Sacred Collar (a toilet seat), the music box (toilet tank), and the ceremonial platform (the bed).

Carson, Harriet, and the volunteers continue to excavate the site until they have uncovered an entire complex of tombs (a motel). After they are finished they decide to display their findings at The Museum. The exhibition is an immediate success and hailed by the population as well as critics. After the exhibit is over, Harriet and Carson decide to open a show at the excavation site. They name is Toot 'n' 'c' mon. Sadly, shortly after the opening both Carson and Harriet face untimely deaths. As more deaths and accidents happen, the entire site and Tomb 26 are closed to the public forever. It is thought that there is a curse on anyone who decides to enter the tomb.

Motel of the Mysteries from BookRags. (c)2022 BookRags, Inc. All rights reserved.