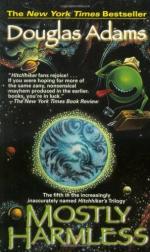 Douglas Adams
This Study Guide consists of approximately 32 pages of chapter summaries, quotes, character analysis, themes, and more - everything you need to sharpen your knowledge of Mostly Harmless.

This detailed literature summary also contains Topics for Discussion and a Free Quiz on Mostly Harmless by Douglas Adams.

Mostly Harmless by Douglas Adams centers around the potential breakdown of the Galaxy. The three main characters go on individual missions ruled by chaos and disorder. Arthur Dent searches for a new life, Ford Prefect fights the bad guys and Tricia McMillian boards an alien spaceship. The experiences of all three characters seal the fate of the Galaxy.

The novel opens with a computer program in complete meltdown mode on the Grebulon ship. The central mission module is damaged beyond repair. The crew's memories, identities and understanding are in the module. Therefore, they lose their minds.

In New York on Earth, Tricia McMillian travels from England to try to score an audition for a US morning news show. Tricia tells the story that she went to a party years ago and met a two-headed alien. He asked her to come with him, but she said she had to get her bag. She got her bag and he left forever. She feels this is a missed opportunity. In the audition, she leaves without her bag and she blows the audition.

Tricia goes back to England. There are marks on her lawn from a spaceship, but she does not believe this is the cause until the spaceship lands. She boards the ship with a video recorder. The spaceship experience is boring and the video is poor quality. The aliens on the ship have lost their minds. The Leader makes her reconfigure the computer to read his astrology chart for his planet, Rupert.

Ford Prefect breaks into the Hitchhiker's Guide to the Galaxy headquarters. Things are out of place and it has lost its glamorous edge. Ford steals the editor-in-chief's identity card. He goes back into headquarters once more and packages a black discus that says Panic. He sends it to Arthur Dent.

Arthur Dent travels planet by planet trying to find his girlfriend who disappeared a year ago when they crashed on Lamuella. Instead, he finds out he has a daughter named Random and he must take care of her. She is a troublemaker. She steals the package from him, goes to the crash site on Lamuella and opens it. Inside is a bird that is the new Guide, which is comprised of nonsense and confuses hitchhikers throughout the Galaxy.

Random goes to Earth. Arthur and Ford go too. Random gets upsets because she says she does not fit in anywhere. Arthur feels better that he is back on his home planet. Ford realizes it is reverse engineering that controls the new Guide and that the Galaxy is in trouble. Far off in space, the Vogon Captain reads his astrology chart and plots to destroy Earth.

More summaries and resources for teaching or studying Mostly Harmless.