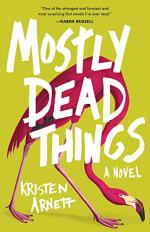 Kristen Arnett
This Study Guide consists of approximately 51 pages of chapter summaries, quotes, character analysis, themes, and more - everything you need to sharpen your knowledge of Mostly Dead Things.

The following version of this book was used to create the guide: Arnett, Kristen. Mostly Dead Things, Tin House Books, 2019.

In Mostly Dead Things, the first-person narrator, Jessa Morton inherits her father Prentice Morton's taxidermy shop after he commits suicide. In a letter he leaves for Jessa, he begs her to upkeep the business and take care of the family. Devastated by her father's death, Jessa is unable to grieve appropriately. Instead of confronting her sorrow, she hides herself in work at the shop, barely spending time with her brother Milo or mother Libby.

When Libby randomly starts rearranging the shop's window displays into pornographic scenes, Jessa demands Milo help her deal with their mother. Once he resurfaces, Milo begins suggesting Jessa sell the shop. Feeling her brother has never even tried to understand the family business, Jessa squashes his advice. She does, however, give in when Milo asks if she will employ his son Bastien, who has just come out of rehab.

Whenever Jessa is compelled to pick Libby up from the gallery she is simultaneously horrified by Libby's work, and overtaken by desire for Lucinda. She is reluctant, however, to act on her feelings as she is still hung up on her former lover, Brynn. As children, Jessa, Brynn, and Milo were always close. When they are teenagers, Brynn and Jessa begin a secret sexual affair, which continues for years, even after Brynn and Milo become pregnant and marry. Though Jessa wishes she could have Brynn all to herself, she realizes she could never give her everything she needs. One day, however, not long after she has her second child, Lolee, Brynn disappears. Milo and Jessa struggle for years to reconcile her abandonment.

In the narrative present, the siblings never address their loss, barely even mentioning Brynn's name. Many facets of their rocky relationship, however, are the product of Jessa's resentment towards Milo, blaming him for wrecking his marriage, and therefore losing Brynn. She is also constantly frustrated with his flighty and elusive behavior, his constant inability to engage with either of his children.

As Lucinda and Jessa's relationship evolves, Jessa begins realizing she does not have Lucinda to herself. She learns that Lucinda lives with her ex-wife and business partner, Donna Franklin, who Jessa often sees visiting the gallery. Though Lucinda says they are no longer together, Jessa's history with Milo and Brynn causes her to mistrust Lucinda. Gradually, Jessa begins pulling away, eventually shutting Lucinda out altogether.

As Libby's opening approaches, Jessa becomes increasingly frantic. She leaves Donna a message, announcing that Lucinda is cheating on her and the animals in the show were illegally acquired. Neither Donna nor Lucinda cancel the show. The night of the opening, Jessa begs Libby to back out, as she believes her mother's work is a disgrace and an embarrassment. Libby does not back down, insisting Prentice repressed and hurt her, the same way Brynn pained Jessa and Milo. The women's dramatic squabble keeps Jessa from attending the opening.

The next day, Milo tells Jessa the gallery mysteriously burnt down before the show could happen. Jessa feels for her mother's loss. To make amends for their argument, she braves the charred gallery and recovers any and all fragments of Libby's work she can find. She works tirelessly to repair each of them, one day driving the entire collection of scraps to Libby's house. Libby is overwhelmed with gratitude. The mother and daughter agree they want to move forward together.

Not long after, Jessa tells Milo she wants to buy the empty building adjacent to the shop as a new gallery venue for Libby. While they are looking at the space, the siblings finally talk about the hurt Brynn caused both of them. In the weeks and months to follow, the family works together to renovate the new space and revitalize the family business. Jessa also restores her relationship with Lucinda, finally feeling she is truly living her own life.