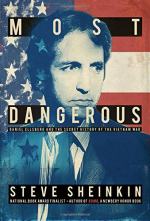 Most Dangerous Summary & Study Guide includes comprehensive information and analysis to help you understand the book. This study guide contains the following sections:

This detailed literature summary also contains Topics for Discussion on Most Dangerous by Steve Sheinkin.

The Vietnam war was raging with no end in sight. Daniel Ellsberg who was a brilliant young man and Harvard graduate who considered himself a patriot. He had joined the Marines after graduating from college and served a tour of duty as an officer. He was employed by the Rand Corporation, a public policy think-tank and research organization where he was deployed to serve in the Pentagon in Washington, D.C. Although he may not have been as hawkish as some of those around him, he was a supporter of the war and wanted to do his part in helping the U.S. emerge victorious from the Vietnam War.

In his position as the Pentagon he was cleared to read the majority of the cables sent to the Pentagon from the warfront. He began to see a difference between the story that was emerging from the on-the-ground commanders in Vietnam and the PR that the White House and Pentagon peddled to the American people. There was no sign of victory or even progress in the cables he read yet the press releases from the White House boasted of great progress and the successful curtailing of the spread of communism in Indochina. He was bright enough to understand the “spin” that the Johnson Administration was putting on the war but it bothered him. However, initially it did not chance his advocacy for the war and eventual victory.

But as time passed, Ellsberg became more and more dismayed by what he saw and heard. An incident referred to as the Gulf of Tonkin incident sparked the escalation of U.S. involvement in Vietnam. Ellsberg was privy to the back and forth transmissions between the warfront and the Pentagon. There was a strong indication that the claim of attack on U.S. ships by the North Vietnamese that was reported was actually a big mistake. Upon a tour of the area by U.S. Navy pilots, there was no sign of enemy ships and that U.S. ships had not been torpedoed which was originally reported. However, Johnson ordered the bombing of the region in retaliation of the incident which probably never happened. Although this became apparent to everyone in the Pentagon and the White House, they kept the truth from the American people.

Ellsberg wanted to do his part to end the war. He even spent two years on the ground in Vietnam fighting alongside U.S. soldiers. He began to realize that there was no win option and believed that the war should end no matter if it was considered a loss. But neither Presidents Johnson nor Nixon wanted to be the first U.S. president to lose a war. Their bloated egos took priority over the death and destruction that was going on a world away.

Ellsberg tried to convince those in power that there was no win and that the U.S. should pull out and stop the carnage. However, the war would not end until it was politically advantageous to the administration. Ellsberg had read a thorough report on the history of Vietnam and the wars that had been waged in the nation over many decades. The report had been ordered by Secretary of Defense Robert McNamara. Ellsberg believed that the American people had the right to know the truth. He smuggled a copy of the 7,000 page report out that came to be known as the Pentagon Papers and gave a copy of it to the New York Times. The truth was out and Daniel Ellsberg would have to withstand accusations of treason and prove that he did not betray his country and that he was a true patriot.