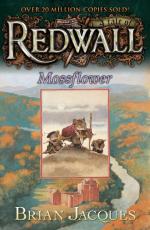 Mossflower: A Story of Redwall is a prequel to Brian Jacques' bestseller Redwall. In this novel, Bella of Brockhall tells a young mouse the story of how Martin the Warrior saved Mossflower from the tyrannical rule of Tsarmina, Queen of a Thousand Eyes. Martin comes to Mossflower as the last of the woodland creatures are fleeing the rule of Tsarmina's father, Verdauga, only to have Tsarmina rise to the throne after Verdauga's death. The woodland creatures want to fight Tsarmina's rule, but they are not strong enough in number to defeat her army. However, Martin travels to Salamandastron to find Boar the Fighter and ask him to return to Mossflower and defeat Tsarmina. A great battle ensues upon Martin's return, freeing all of Mossflower. Mossflower is a riveting prequel that will satisfy many questions for fans of Redwall.

Martin the Warrior arrives in Mossflower just as the last family is fleeing the area in search of sanctuary among the woodland creatures. Martin is quickly arrested by Verdauga's army for carrying a weapon inside his territory. Martin is taken to the king where he is sentenced to the Kotir prison cells. That same night, Verdauga dies after being fed a poison arranged at the hand of his daughter, Tsarmina. Tsarmina blames the death on her brother, Gingivere, and has him imprisoned as well. Both Martin and Gingivere spend the winter in Kotir's prison.

During the spring, a thieving mouse is caught in the forest with food stolen from Kotir. The mouse, Gonff, is quickly arrested and placed in a cell with Martin. Gonff and Martin are both freed with help from the woodland creature resistance, the Corim. Soon after, Martin becomes a part of the resistance, helping the woodland creatures figure out a way to fight Tsarmina's rule and free Mossflower. To this end, Martin learns about the rightful ruler of Mossflower, Boar the Fighter. Martin agrees to make a quest to Salamandastron and bring Boar the Fighter back to help defeat Tsarmina.

As Martin, Gonff, and a young mole called Dinny, leave for their quest, the Corim learn about the arrest and imprisonment of two young hedgehogs. The Corim develop a plan to feed the poor captives while they work out a way to rescue them. A battle ensues between the woodland creatures and Tsarmina's troops, but the woodland creatures managed to escape mostly unharmed. A short time later, they enlist the help of an otter who has a knack for disguising himself as many different types of animals. This otter manages to get into Kotir disguised as a fox. Tsarmina believes his cover story and immediately makes him captain of her guard.

The otter manages to get both the young hedgehogs and Gingivere out of Kotir, but his secret is discovered as they flee and Tsarmina manages to get an arrow into him as he leaves. The otter dies, bringing about the wrath of his friends and family. The woodland creatures become more determined than ever to defeat Tsarmina. To this end, they draft a plan to flood the natural lake that once existed under Kotir. However, as they work on this plan, a fox and his band of mercenaries join Tsarmina and her army. This fox is a brilliant strategist who arranges an attack on the woodland creatures as they work on their plan, killing several of them. In revenge, the woodland creatures attack Kotir at dawn, killing many of their men and destroying their doors and shutters.

Tsarmina no longer trusts the fox and so she arranges for him to die. Later, Tsarmina threatens the remaining mercenaries against fleeing. The woodland creatures begin to flood Kotir, but the plan does not work due to low water levels. The woodland creatures decide they must flee Mossflower. However, at that moment Martin returns with an army and a plan. Martin and his army lead an attack on Kotir, and at the same time dam the river to flood Kotir. Martin faces Tsarmina one on one and kills her. Mossflower is then free to build the great abbey known as Redwall.