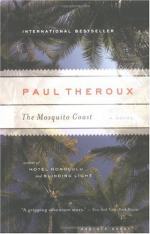 This detailed literature summary also contains Related Titles and a Free Quiz on The Mosquito Coast by Paul Theroux.

Mosquito Coast recounts the adventures of Allie Fox, a brilliant, talkative, irascible, manic inventor. Fox is a mass of contradictions, disdaining religion and American pop culture but refusing to buy foreign products. When Fox is unappreciated at work, he impulsively decides to move the family to the tropics. In Honduras, Fox purchases Jeronimo, a remote settlement where he creates a comfortable village. However, Fox becomes deceptive and delusional, and he ultimately destroys all he's built. As Fox leads his family into the jungle, he becomes more mentally unbalanced, ultimately causing his own destruction.

In the beginning of the tale, Allie Fox is critical of much of American pop culture, including the educational system, religion and the consumer society typified by aerosol cheese. Fox works as a handyman and jack-of-all-trades for a local farmer. After Fox's latest invention is coolly received by his employer, he impulsively packs up the family and decides to build a new life in the tropics. The family takes along only necessities like sleeping bags and tools, leaving behind their comfortable home and even leaving dishes in the sink. In Honduras, Fox purchases land on a small inland river and establishes a comfortable settlement with an assortment of native helpers. Fox is not satisfied with improvements like houses, a water wheel, an outdoor shower and privies with flush toilets. He builds a giant ice house capable of producing tons of ice. Fox is determined that the ice will establish his reputation as a miracle-worker in nearby villages. When three white men with guns enter the settlement, Fox tries to trick them into leaving. The men refuse, and Fox locks them in the icehouse, which soon explodes, burning down the entire settlement.

The Fox family flees by boat to Laguna Miskita, where, unassisted, they build a boat-like home and plant a garden. Fox's mental condition deteriorates, and he is convinced that the U.S. has been destroyed in a gigantic civil war and that he is the last white man alive. Torrential rains wash the garden away, and the house floats off with the Foxes inside. Fox takes his family upstream to Guampu. When the Foxes encounter the missionary settlement of Rev. Spellgood, they learn that the war was merely a delusion. Infuriated, Fox sets fire to the missionary's generator and airplane, and he is shot. The family, with a wounded Fox in tow, escapes by Land Cruiser and small boat to the sea. There, Fox crawls into the brush, attempting to return to the jungle, and dies. He is buried on the beach, and the family journeys back to New England.