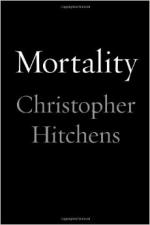 On the day that Christopher Hitchens was scheduled to launch his American book tour for a new book that he wrote, he learned that he had a very serious condition and was advised to immediately go see an oncologist.

Although Christopher was born and educated in England, he spent a lot of time in the United States. He grew to love America and think of it as his own. He shared an apartment in New York City with his wife and daughter.

Even though Christopher fell very ill on the morning of the launching of his book tour, he was able to keep his commitment to appear on the Jon Stewart Comedy Hour that evening.

Even though Christopher had been in the hospital in the morning, he kept an appointment for...