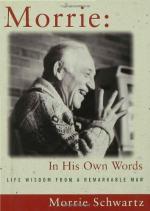 Morrie: In His Own Words Summary & Study Guide

Morrie Schwartz
This Study Guide consists of approximately 20 pages of chapter summaries, quotes, character analysis, themes, and more - everything you need to sharpen your knowledge of Morrie.

Morrie: In His Own Words Summary & Study Guide Description

Morrie: In His Own Words Summary & Study Guide includes comprehensive information and analysis to help you understand the book. This study guide contains the following sections:

This detailed literature summary also contains Topics for Discussion and a Free Quiz on Morrie: In His Own Words by Morrie Schwartz.

Morris "Morrie" Schwartz (1916-1995) was a professor of sociology at Brandeis University from 1959 until his retirement following getting his Ph.D at the University of Chicago. During that time, he studied the sociology of sickness, death and grief, his interest in which had been spurred by his mother's death when he was a child. In 1994, Schwartz was diagnosed with ALS or Lou Gehrig's disease. Towards the very end of his life, ABC News Anchor Ted Koppel interviewed him several times about his illness for the ABC news program Nightline. When the interviews were aired, many of Schwartz's friends and former students reestablished contact with him. One of them, Mitch Albom, helped him write the book, Tuesdays with Morrie, before Schwartz died. In 1999 it became a popular movie.

Around the same time, Schwartz composed a number of aphorisms that combined his wisdom as a teacher of sociology and as someone with a terminal illness. When he shared the aphorisms with friends, they encouraged him to circulate them further. This circulation resulted in the present book, Morrie: In His Own Words. The book is a series of aphorisms about how to cope with a terminal illness socially, emotionally, physically and spiritually. The book is divided into two parts, 'Understanding Where You Are Now' and 'Getting to Where You Want to Be'. The former part focuses on helping his readers (not merely those with terminal illnesses) to cope with their current life situation. The latter part focuses on helping his readers to look forward and to not be afraid to develop as a person despite the approach of death.

Part I has five chapters. Chapter 1 explains what it is like to live with physical limitations and how to struggle with the actual day-to-day physical deterioration. Chapter 2 explains how to handle frustration. Chapter 3 encourages the reader to grieve for her losses and Chapter 4 encourages her to reach acceptance about all the conflicts in one's life, including those beyond her illness. Chapter 5 advises the reader to review her life as a whole and that illness is often a good time to do this.

Part II contains six chapters. Chapter 6 asks the sick reader to stay actively involved with life through community activities, reading, talking to people or at least interacting with them. Chapter 7 recommends keeping one's relationships with others as alive and warm as possible and Chapter 8 recommends doing the same for how the sick person treats herself. Chapter 9 helps the reader to deal with her mind and emotions, to exercise control so as not to lose hope. Chapter 10 asks the reader to develop some sort of spiritual connection as she approaches death. The final chapter, Chapter 11, advocates reconsidering one's conception of death and seeing it as more continuous with life than members of modern Western societies typically do.

More summaries and resources for teaching or studying Morrie: In His Own Words.

Morrie: In His Own Words from BookRags. (c)2022 BookRags, Inc. All rights reserved.