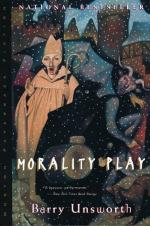 This detailed literature summary also contains Topics for Discussion and a Free Quiz on Morality Play by Barry Unsworth.

Morality Play is set in fourteenth-century England. It tells the story of a renegade priest, who serves as the narrator, and a company of travelling actors. The priest, Nicolas Barber, happens upon the travelling players, who have stopped at a clearing in the countryside to care for Brendan, a dying friend and fellow actor. Nicolas joins the acting company, taking over Brendan's role, even though he fears that play-acting is considered a sin by the diocese. The players travel with the dead man in their cart for some time but eventually realize that they must stop somewhere to bury him.

The need to bury Brendan brings the players to a mysterious unnamed town that is caught up in a local murder scandal. When the players arrive, they discover that a young boy has been murdered and that a woman has been tried and condemned with the crime. Martin Bell, the principal actor in the group, seeks to exploit the murder scandal to advance his acting reputation. He convinces the other players to create a play about the murder. In order to pull off the performance he desires, the players must speak with various townspeople to gather as much information as possible. As they learn more details about the crime, the players discover that the condemned woman is actually innocent. The real criminal is traced back to the castle of Richard de Guise, a feudal lord who controls the town and its citizens.

As the story progresses, the narrator, Nicolas Barber, takes readers through the murder mystery in a step-by-step process, revealing clues slowly. The novel, however, is more than just a murder mystery. It also tells the tale of Barber's battle between good and evil and his quest to keep his soul intact against sinister forces. From the beginning of the story, Barber is at odds with the Holy Order. By the time he meets the players, he has already committed adultery and gambled away his only worthy possessions. In essence, Barber suffers while he attempts to discover his true path in life. During this difficult journey, he finds he must question himself every step of the way, as he tries to discern which choices are correct and which, on the other hand, will lead him astray.

Barry Unsworth's novel also addresses another important thematic element, albeit addressed by literary fiction. The novel is an unapologetically honest look at the corruption of nobility and the diocese in fourteenth-century England. Unsworth uses the townspeople to represent the hardships suffered under the weight of fraudulent systems of power during that time. The book also addresses the tragedy of lives lost at the hands of the plague or famine.

Overall, Morality Play can be described as engaging, suspenseful, and carefully crafted. It is a novel that can easily be compared with other contemporary literature classics. Unsworth's attention to detail and plot development, as well as his extraordinarily beautiful writing style, distinguishes him from less talented writers.