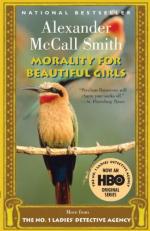 Alexander McCall Smith
This Study Guide consists of approximately 42 pages of chapter summaries, quotes, character analysis, themes, and more - everything you need to sharpen your knowledge of Morality for Beautiful Girls.

This detailed literature summary also contains Topics for Discussion and a Free Quiz on Morality for Beautiful Girls by Alexander McCall Smith.

This is the third in a series of books about Precious Ramotswe, the owner and chief detective of the No. 1 Ladies' Detective Agency. Set in the African republic of Botswana, this entry into the series sees Mma Ramotswe investigating a suspected poisoning at the same time as she struggles to determine the best choice of action when it comes to the depression of her fiancé, Mr. J.L.B. Matekoni. As the narrative dramatizes questions of what defines morality, it also explores themes relating to the nature of beauty and the value of compassion.

The novel begins with a brief summing up of the circumstances that have brought Mma Ramotswe to this point in her life; in particular, the development of her relationship with Mr. J.L.B. Matekoni and the establishment of the Agency and the hiring of assistant Grace Makutsi. Mma Ramotswe, however, faces the difficult task of making some changes - having Mr. J.L.B. Matekoni moving into her home will be relatively easy, but moving the Agency into a back room of his garage might be more difficult. Somewhat surprisingly, however (and as the result of being offered a new position with more responsibility), Mma Makutsi proves to be more accommodating than Mma Ramotswe thought she was going to be.

As plans solidify for the various moves about to take place, Mma Ramotswe has to come to grips with other events and circumstances, all of which have to be handled at the same time and with similar degrees of tact and patience. There is her sudden awareness of Mr. J.L.B. Matekoni's depression, which has led him into irresponsibility at work. There is the case brought to the Agency by the Government Man, who wants Mma Ramotswe to find out the truth of why life on his cattle ranch seems so unhappy, and specifically whether his brother's new wife is after his brother's money. Then there is the case of a wild, mute boy brought to an Orphan Farm. Finally, there is the question of how to keep life at home with Mr. J.L.B. Matekoni's two adopted children functioning in the middle of all these demands.

One by one, Mma Ramotswe takes steps to address each and all of these circumstances. She arranges for Mr. J.L.B. Matekoni to move out to the orphan farm, where Mma Potokwane (the farm's efficient but compassionate administrator) will take care of him. She also arranges for Mma Makutsi, who has a degree in office administration, to take over the running of Mr. J.L.B. Matekoni's garage, Tlokweng Road Speedy Motors. The two apprentices who work there are reluctant, at first, to take orders from a woman, but they soon start responding to Mma Makutsi's firm managerial hand. In the meantime, Mma Ramotswe goes out to the large cattle farm run by the Government Man's brother, and discovers a very different set of circumstances that he had led her to believe were present.

While Mma Ramotswe is away, Mma Makutsi is offered a case of her own to investigate - the question of which of the four finalists in The Miss Beauty and Integrity Contest is best suited to win the title. As Mma Ramotswe survives a poisoning attempt, Mma Makutsi puts together a plan to interview the finalists. Then, as Mma Ramotswe gets to the truth of what's happening at the cattle farm (discovering that a disgruntled cook is behind the poisonings), Mma Makutsi discovers that one of the finalists is, in fact, the perfect candidate. Upon returning home, Mma Ramotswe confronts the Government Man with the truth of what she has discovered. Not only was the Cook unhappy, but the rest of the family is unhappy with how the Government Man has allowed his need for status to overwhelm his need for his family. The Government Man realizes the error of his ways, and vows to change.

With the garage running smoothly and the Agency celebrating the successful completion of two cases, Mma Ramotswe visits the orphan farm, where she discovers that in spite of Mr. J.L.B. Matekoni's efforts at communicating with the Wild Boy, the boy is as unreachable as ever. She is, however, happier to discover that Mr. J. L. B. Matekoni seems to be returning to normal.

More summaries and resources for teaching or studying Morality for Beautiful Girls.