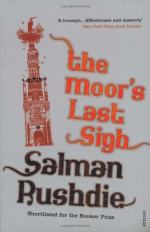 Salman Rushdie
This Study Guide consists of approximately 78 pages of chapter summaries, quotes, character analysis, themes, and more - everything you need to sharpen your knowledge of The Moor's Last Sigh.

This detailed literature summary also contains Related Titles and a Free Quiz on The Moor's Last Sigh by Salman Rushdie.

The Moor's Last Sigh tells the family history of Moraes Zogoiby, known as "the Moor." He is the last survivor of a family descended from the Portuguese explorer Vasco da Gama (ca.1469-1524), who sailed to India in search of spice and whose offspring grew rich in shipping it to the West. Among his ancestors, Moraes also numbers Boabdil (Abu 'Abd Allah Muhammad XI, ca. 1460-1527), the last Muslim king in Spain, forced in 1492 to surrender his city to Ferdinand and Isabella. The spot from which Boabdil gazed for the last time at Granada is today a tourist attraction, known as 'The Last Sigh of the Moor.' His descendents, who made their way to southern India, took, as their family name, his nickname, "Zogoiby" - "The Unfortunate." Another branch of the family descended from Black Jews who immigrated to Cochin, India, and built a synagogue in 1568. It, too, is a famous landmark, preserved to this day. Moraes concentrates on the last four generations of his ancestors, spanning the first eight decades of the twentieth century. At every point in this fictional tale, authentic history is interwoven.

We first meet Moraes at age thirty-six in Spain, breathless, on the run, and determined that his quirky family's story will not perish when he dies. He introduces first his mother, Aurora, as a young girl and offers detailed depictions of her close relatives that help us understand how she could evolve into the strong, difficult character who would destroy the one true love of her only son's life, cast him out of her home and life, and, unreconciled, suffer a tragic, accidental death. The pain of these events fills Moraes' story long before the circumstances are relayed.

Moraes gives less detail about his paternal line. His father, Abraham Zogoiby, is introduced as a manager in the Gama Trading Company warehouse. Aurora falls in love with him and seduces him away from his Jewish heritage. We meet his conniving mother, Flory, and witness their split over his decision. We see Abraham taking control of the business and returning it to prosperity (in the dangerous, early days of World War II) with financial help from Flory. Her condition on the loan is that he turns his first-born son over to her, to be raised as a Jew. Agreeing to this creates a rift with Aurora, whom we follow to Bombay and great success in the worlds of art and politics, as India comes to independence in 1947. Again, historical figures - Mahatma Gandhi and Jawaharlal Nehru - are skillfully woven into the narrative.

Only after Flory's death do Abraham and Aurora reunite, and we are introduced to their four children, Ina, Minnie, Mynah, and Moor (Aurora intended the humor in their names), and the servants who care for the prosperous Bombay household. We meet a fellow artist, Vasco Miranda, who takes up residence in the house and helps Moraes come to grips with the forces that form his personality: a malformed right hand and a rare condition that causes him to physically age at twice the rate he develops chronologically and emotionally. Doorkeeper Lambajan teaches him to box. Ayah (the title of native nursemaids in India) Jaya Hé introduces him to the city's vibrant streets. Tutor Dilly Hormuz unleashes his sexuality. A cruel critic of his mother's work, Raman Fielding, brings us into the volatile mix of religion and politics that thrive in Mother India. Sitting for his mother's Moor paintings, and listening to her chatter, helps Moraes understand her personality. Like magnets, mother and son attract and repel one another. Abraham remains, for a long while, a distant, indistinct character; it is only hinted that they will some day reconcile and Moraes will learn - and dutifully relay - the dark details of his father's business.

Finally, as the first part of the novel ends, we are introduced to the long-anticipate lover, Uma Sarasvati. She is a mysterious, contradictory figure, who utterly shatters the Zogoiby family. Aurora, alone, is never taken in by her charms. How Uma can cause such a violent rift between her and her son remains a mystery for much of the book. The reality of it, however, is that Moraes must set upon a new, independent chapter of his life.

This chapter begins in prison, following Moraes' arrest for Uma's murder and involvement in his father's black marketeering in narcotics. He is rescued by Raman "Mainduck" Fielding, who is closing in on his goal of political mastery of Bombay. Moor becomes "Hammer," as a member of Fielding's elite goon squad that terrorizes and intimidates anyone who opposes the interests of the Hindu majority. For the first time Moraes is comfortable with his deformed right hand and administers savage beatings to foes, not just obediently, but enthusiastically and with relish. We meet Hammer's colorful, sadistic colleagues: Sammy "the Tin Man" Hazaré and Chhaghgan "Five-in-a-Bite."

Following Aurora's death, "Hammer" leaves Fielding's camp, which further unravels when the beauty queen Nadia Wadia drives a wedge between commander and Hazaré. "Moor" reconnects with Abraham and allies with him to bring peace to his mother's still tormented soul. Through a private investigator, we learn that both parents have had multiple sexual partners and harbored a multitude of secrets. While these unravel, it appears that Aurora's death was not an accident. "Hammer" once more goes into action, murdering Fielding, the presumed perpetrator.

Moreas flies to Spain, to search for four of his mother's paintings that survived the conflagration. Three, he was certain, had been stolen by Vasco Miranda, the artist whom Aurora had dismissed from her household fourteen years earlier. Miranda's painting, which Aurora had mocked as commercial fluff, had earned him a vast fortune and international fame. He used his riches to construct a hideous fortress on a hillside in Benengeli. We follow him, wandering the city, taken in by half-sisters who claim to be the aging recluse's housekeepers. When they bring Moraes word that a parcel has been delivered to the fortress, he convinces them to smuggle him inside. There, he is taken prisoner and locked up in the tower with a Japanese art conservator, Aoi Ué, kidnapped to remove Miranda's pedestrian over-painting of The Moor's Last Sigh in order to reveal the original portrait of a bare-breasted, young Aurora Zogoiby. Miranda orders his new companion to record his life story in full detail, promising that, like Scheherazade, he will be allowed to live so long as his tales amused his master. When both tasks are complete, Miranda turns his gun on them. Aoi perishes, but Moor is spared when the drug-crazed, bloated gunman's heart explodes as he had long ago predicted it would. Moor flees, nailing sheets of his story to trees and fences across the countryside, coming to rest in the overgrown cemetery where we first met him, hoping he will, in death, find peace.

More summaries and resources for teaching or studying The Moor's Last Sigh.