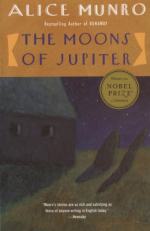 This detailed literature summary also contains Quotes and a Free Quiz on Moons of Jupiter (short story) by Alice Munro.

The story opens in Toronto General Hospital. Janet, a divorced, middle-aged writer, visits her father in the cardiology wing. She had driven him to the hospital the day before due to a possible problem with his heart. An examination by a heart specialist had revealed that one of Janet’s father’s heart valves had severely deteriorated. The doctor said that without an operation, Janet’s father would likely die within three months. While in the hospital waiting room, Janet had read a news article about a younger and more successful writer. Janet thought about how her father would potentially criticize her for having no articles written about her; she also thinks that her father would criticize her if there were an article written about her.

Janet’s father decides not to have the operation. He believes that an operation would be too risky at his age. Janet thinks about her father’s childhood. He grew up on a poor farm under the care of a harsh father. He eventually ran away from the farm and went to work on boats on Lake Ontario. Janet then thinks of her two daughters, Nichola and Judith. Nichola is the older one. She used to attend an arts conservatory, and then she worked as a waitress. Nichola has cut off contact with her family for the time being, so Janet no longer knows where she is or what she is doing. Janet’s younger daughter, Judith, lives in Toronto with her boyfriend Don. Janet is staying in their apartment while she is in Toronto. Don’s presence makes Janet uncomfortable, as she does not like the thought of Judith gossiping to Don about her.

Soon after Janet arrived in Toronto, Judith and Don begin driving to Mexico for a planned vacation. Janet thinks about her days as a stay-at-home mother, when Nichola and Judith were young and when Janet was still married. She recalls those years as generally confining and unfulfilling. She recalls receiving a call from her father after she arrived in Toronto. He said that he needed to go to the hospital, so Janet drove him from his home in Dalgleish to Toronto general Hospital. The narrative shifts back to the present, when Janet has returned to the hospital. Her father says that he has changed his mind and will be having the surgery, as the doctor strongly advised that course of action.

Janet thinks about her father’s regrets in life, such as not entering the Canadian Army as a tradesman and not leaving Dalgleish. Her father begins to discuss an article he read in which people recounted their experiences of being medically dead for a few minutes. He says that he wishes he could unequivocally believe in the concept of the human soul. As they continue to converse, Janet’s father subtly criticizes Janet’s divorce, and Janet, though angry, chooses to remain calm. The next day, while her father is undergoing more medical tests, she distracts herself by wandering through downtown Toronto. She attends a planetarium and is awed by the presentation on the solar system. She discusses it with her father when she returns to the hospital, and she feels as if she is more prepared to accept the uncontrollable challenges presented by family relationships.