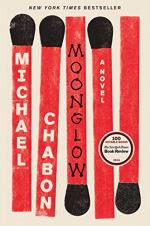 Michael Chabon
This Study Guide consists of approximately 46 pages of chapter summaries, quotes, character analysis, themes, and more - everything you need to sharpen your knowledge of Moonglow.

This detailed literature summary also contains Quotes and a Free Quiz on Moonglow by Michael Chabon.

The following version of this book was used to create this study guide: Chabon, Michael. Moonglow. Harper, 2016.

Moonglow is a novel presented as a memoir, in which the narrator (a fictionalized version of the author) recounts the lives of his grandfather and grandmother. The book is structured as a series of nonlinear anecdotes, most of which are presented in a frame narrative concerning the grandfather’s last days before dying of bone cancer in 1989. The grandfather, under the influence of powerful pain medication, becomes uncharacteristically talkative and begins to relate his life story to the listening narrator. These anecdotes are presented to the reader through the narrator’s own voice and interpretation of events. The anecdotes are presented in a nonlinear order, beginning in the middle of his life and then jumping back and forth to gradually reveal the larger picture of his life story. Some extended, multi-chapter anecdotes are temporarily interrupted and then resumed later, and occasionally, the narrator interjects stories of his own personal experiences as they relate to his grandparents and other family members.

The narrator’s grandfather lives from about 1920 to 1989. As a boy, he lives with his parents in Philadelphia and then attends Drexel Tech to obtain an engineering degree. Afterwards, he enlists in the United States Army Corps of Engineers and is selected for training in espionage. He serves as a soldier and spy in European combat zones during World War II and discovers information connecting German rocket engineer Wernher von Braun with complicity in Nazi atrocities. (Von Braun is a real historical figure and was instrumental in helping NASA put a man on the moon.)

After the war, the grandfather meets a French immigrant in Baltimore who has a four-year-old daughter. The daughter is the narrator’s mother. The grandfather, who has no actual blood relation to the narrator, marries the French immigrant, who is of course the narrator’s grandmother. The narrator’s grandmother suffers psychiatric distress from traumatic experiences in France during World War II. The grandfather works as an aerospace engineer and even starts his own firm, but he is forced to become a salesman to pay for his wife’s psychiatric care after she has a miscarriage and suffers a mental breakdown. After a severe episode in which she burns down a tree in her front yard, the grandfather is coincidentally fired from his job, and he attacks the president of the company in a rage. He then serves 13 months in prison and builds a working model rocket, which he sells to a toy company. In 1975, his wife dies of cancer, so the grandfather moves to Florida to be close to Cape Canaveral, the site of many NASA spaceship launches. He has a romantic affair with Sally Sichel, a fellow resident of his retirement community, but when he is diagnosed with bone cancer, he moves in with his daughter in San Francisco to live out his final days. Throughout much of his life, the grandfather struggles with his love of space travel and the fact that the glorious human achievement of landing on the moon has roots in Nazi activity. In his final days, he appears to have reached no clear answer on the moral quandary.

The life stories of the narrator and his mother also enter into the book’s overall narrative. While her mother is in a mental hospital and her stepfather is in prison, the narrator’s mother is taken care of by her stepfather’s brother, Reynard. They have a brief sexual affair, despite the fact that she is only in her early teens at the time, and when he later spurns her, she shoots him in the eye with an arrow, rendering his eye nonfunctioning for the rest of his life. She later marries a doctor, lives in Flushing, Queens in New York City with her husband and parents, and she and the doctor give birth to the narrator. However, when the doctor and Reynard enter into a shady business deal with organized criminals based in Philadelphia, the business is broken up by the authorities, and the doctor flees to escape legal repercussions, leaving the narrator’s mother and her parents to deal with the legal issues. The legal defense is costly, but no one related to the narrator appears to suffer legal consequences. The novel ends with an anecdote from after the death of his grandfather, in which the narrator and his mother attend the grandfather’s funeral and admire his old things, most notably a model spacecraft he built, complete with miniature figures of the grandfather and his family. All of these anecdotes are interspersed with the nonlinear telling of the grandfather and grandmother’s life stories.

More summaries and resources for teaching or studying Moonglow.