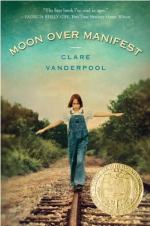 Clare Vanderpool
This Study Guide consists of approximately 43 pages of chapter summaries, quotes, character analysis, themes, and more - everything you need to sharpen your knowledge of Moon Over Manifest.

This detailed literature summary also contains Topics for Discussion and a Free Quiz on Moon Over Manifest by Clare Vanderpool.

Moon Over Manifest is a novel by author Clare Vanderpool. In this novel, Abilene Tucker has been sent to stay with friends of her father in Manifest, Kansas in 1936. Abilene is unhappy being separated from her father and hopes that he will return for her before the end of summer. To keep her occupied, Abilene attempts to unravel a mystery apparent in a group of letters she finds hidden in the room she is living in in the home of her father's friend, Shady Howard. This mystery, however, will reveal more than the identity of a spy as Abilene finds her place in Manifest. Moon Over Manifest is a touching story of one girl who learns to be a child even as she discovers what it means to be an adult with too much responsibility.

Abilene Tucker has grown up on the rails, moving from town to town with her father, Gideon, until recently. Gideon has sent Abilene to live with Shady Howard, an old friend of his from his childhood that Abilene never knew about. Abilene is confused over her father's sudden need to send her away, a need that recently came between them after Abilene nearly died from an infection in a cut on her knee. However, Abilene is confident that Gideon will return before the end of summer to get her.

Abilene jumps off the train before it pulls into the station, having learned from Gideon that a person should see a town before it has a chance to see her. Abilene walks along the road and comes across a gate that says Perdition. Abilene knows what perdition means because she and Gideon have often gotten free meals in various churches while on the road. As Abilene ponders this, Shady Howard comes up behind her. Shady takes Abilene into town where she meets Hattie Mae, the writer of a column in the local paper whom she is aware of because of a copy of the local paper her father has carried around all these years.

The following day, Abilene goes to the last day of school so that she might meet some of the local kids. The nun who teaches her class gives Abilene an assignment to write a story that is due at the end of summer. Abilene does not believe she will be in Manifest at the end of summer, so she quickly forgets about the assignment in favor of studying some letters and keepsakes she finds in a box in the room she is using at Shady's. While looking through the letters, Abilene is joined by two girls from school, Lettie and Ruthanne. Abilene tells them about a mysterious spy mentioned in the first letter. Together the girls make a list of suspect from the people who lived in the town then and now, suggesting they spy on them for clues.

The girls spend the rest of the afternoon following their suspects around, following the undertaker, Mr. Underwood, to the cemetery, where they see him measuring out a grave from the length of his own body. Afterward they return to the treehouse and discover a note warning them to back off. The girls think the note is from the spy, the Rattler. Lettie and Ruthanne go home then because it is getting dark. Abilene realizes that she lost her father's compass. Abilene goes in search of it and finds it hanging on the porch of the house with the Perdition gate. Abilene tries to get it back, but cannot reach it and breaks a pot she used to stand on.

Abilene returns the following day to get her compass and ends up paying Miss Sadie, the owner of the home, to read her fortune. Miss Sadie tells Abilene a story about the two boys in the letters she found and then makes Abilene promise to work around her house to pay off the price of the pot. As Abilene spends the summer working for Miss Sadie and hunting for the Rattler with Lettie and Ruthanne, she learns how the boys in the letters, Jinx and Ned, changed everything for the people of Manifest. However, Abilene also learns of Ned's death in World War I, a devastating moment for both Jinx and Miss Sadie.

When the stories are over, Abilene discovers that Miss Sadie was Ned's mother, separated at Ellis Island when they first arrived in the country. Abilene also learns that Jinx thought Ned's death was his fault and that he has been running ever since. Jinx is Abilene's father, Gideon, and he believes that he is the cause of the deaths of everyone he loves, which is why he has sent Abilene to Shady. However, Abilene is able to convince Gideon to come to her in Manifest, their one true home.

More summaries and resources for teaching or studying Moon Over Manifest.