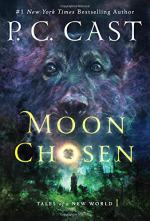 P. C. Cast
This Study Guide consists of approximately 46 pages of chapter summaries, quotes, character analysis, themes, and more - everything you need to sharpen your knowledge of Moon Chosen.

The heroine, Mari, played a game in her burrow with her mother, Leda. Leda was an Earth Walker, a supernatural race of beings who lived in the forest and had a magical connection to the earth and the moon. Leda was her clan’s Moon Woman, which meant she was a healer, a leader, and a priestess all in one. Her main role was to call down the moon’s power to wash away a sickness called Night Fever from the clan. If she did not do so every three days, the clan’s women would get depressed and then clan’s men would get violent. Mari was her daughter, but Mari’s father, Galen had been a Companion, another race that worshipped the sun and had a magical psychic connection with dogs. Companions enslaved Earth Walkers, and Galen had been killed by his people after Mari was born, so Mari and Leda hid Mari’s appearance from the clan with makeup and hair dye, but even those could not always keep her skin from glowing in the sun, so she had to spend much time alone. Leda wanted to name Mari her heir, but she could not because the clan thought Mari spent so much time at home because she was sickly.

Meanwhile, a character named Dead Eye lived in the city. He was a part of the third race in the novel, the Skin Stealers. The Skin Stealers were infected with radiation poisoning and they ate Companions in an attempt to heal themselves. They worshipped a god called the Reaper that demanded blood sacrifice. Dead Eye decided that the religion was false and set out on his own, only to discover that he himself could have the power of a god if he manipulated the situation the right way.

In the city in the trees where the Companions lived, Nik was the son of the Sun Priest, Sol. Nik was twenty-three and a dog had not chosen him yet, so he feared he would never have a dog and, because the rules of his society dictated that only Companions with dogs could hold positions of power, Nik feared he would never be able to follow in his father’s footsteps. Nik took one of the unclaimed puppies down from the trees to let him go to the bathroom, but they were attacked by large, mutant cockroaches. The dog ran off and went to Mari’s burrow. She opened the door and was frightened, but then she felt the magical psychic bond and she knew that he had chosen her. Leda decided that she would name Sora, a girl Mari hated, as her heir. Right after her announcement, the Companions attacked the Earth Walkers while looking for Rigel and captured Mari’s friend Jenna and killed her father Xander. Nik led his prisoner, Jenna, to Farm Island where the enslaved Earth Walkers were kept, and began to feel as if what the Companions were doing was wrong. The next day, the Companions came back looking for Rigel again, and this time Leda fell when running away from them and twisted her neck. When Mari realized that her mother was dead, she spontaneously lit the forest on fire with her untapped sun powers.

Mari went back home and mourned with Rigel. When she finally left her burrow, weeks later, she ran into Sora, who begged her to teach her how to be a proper Moon Woman. Mari decided to let Sora stay with her for a short time, so that she could teach her how to call down the moon. Dead Eye decided to take his people into the forest and in order to clear out the population, he devised a plan to infect the Companions and Earth Walkers with radiation poisoning. Nik and his cousin O’Bryan went out to look for Rigel again, and O’Bryan got injured. When their skin breaks, Companions are likely to contract a disease called The Blight and die. Nik took him home to the hospital and hoped that he would not get sick. The next morning, Nik went out with a foraging party to search for supplies, but they were overrun with Skin Stealers. Nik was shot in the back with a spear and fell into the river, drowning. Dead Eye captured a Companion named Thaddeus who had already contracted the radiation poisoning, and he let him go so that Thaddeus could infect the rest of the Companions.

Mari decided she wanted to stop disguising her true self, so she and Sora went to the bathing spot at the river and she washed her hair and cut it short. Rigel started barking and led the girls down the river to where Nik was lying, unconscious. Sora wanted to kill him, but Mari decided to save him. They brought him back to the burrow and healed him with the moon while he was unconscious. Nik and Mari got to know one another while he healed, and they started to like one another, but then he contracted The Blight. Mari searched her mother’s journals for a cure and found one. She performed the cure on Nik, which involved calling down the moon while he was asleep, and he was healed. Mari and Sora left to look for clanswomen, and they found a girl named Danita who had been raped by clansmen.

Mari took Nik back home and he told his father about what she had done for him. His father told him that O’Bryan was dying of The Blight, and they concocted a plan to get Mari to cure him. Nik broke into Farm Island and rescued Jenna, then took her to Mari and explained that his cousin was sick and dying. Mari came with him to the tree city where he lived and healed O’Bryan. Then she asked Nik and his father to take her to Farm Island so that she could heal the women of their sadness. They agreed, and on the way Nik and Mari kissed. When they arrived, Mari healed the women, but then a group of Companions arrived and told Sol that he had to kill Mari and lock up the Earth Walkers. When Sol refused, Thaddeus took a shot at Mari with his bow and arrow. Sol jumped in front of the arrow and died, and the Earth Walkers panicked. They started running and knocked down a lantern that caught one of the huts on fire. A massive fire spread off the island and into the trees. Mari and Nik escaped with their dogs.

More summaries and resources for teaching or studying Moon Chosen.