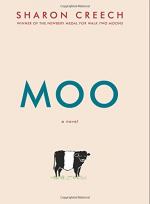 Sharon Creech
This Study Guide consists of approximately 52 pages of chapter summaries, quotes, character analysis, themes, and more - everything you need to sharpen your knowledge of Moo.

This detailed literature summary also contains Quotes and a Free Quiz on Moo: A Novel by Sharon Creech.

Moo, a young adult novel by Sharon Creech, is a heartwarming story of a family's adventure as they move from the city to a coastal Maine town. Twelve-year-old Reena, her seven-year-old brother Luke and their parents make a spontaneous decision to change the course of their lives, leave their city home and start a new life somewhere completely different. They settle on Maine and within weeks make the big move.

With the whole summer ahead of them, Reena and Luke begin to explore their new town which is especially easy given the freedom to bike on the safe, wide country roads that span out from their little harbor town. Early on, while running an errand for their mother, they meet Mrs. Falala and do not have a good first impression of the elderly woman. On a second visit, the children do not make a good impression themselves, and Mrs. Falala believes that they are rude. Through an arrangement made by their parents, the children are expected to work on Mrs. Falala's farm in an attempt to reconcile the two parties. During days of mucking out stalls, hauling water and feeding animals, the children and Mrs. Falala get to know each other and develop a mutual respect for one another.

Mrs. Falala begins to train Reena to show her cow, Zora, at the fair. Zora is a Belted Galloway and happens to be a stubborn, ornery cow. Reena learns to care for, train and gain the cow's trust. She is helped by some new teenage friends who work at nearby Birchmere Farm. Beat and Zep teach Luke and Reena everything they need to know about caring for the cows. When Reena becomes concerned that Zora is lonely by herself at Mrs. Falala's, Zep supports her in getting a friend for Zora. He brings Yolanda to the farm and visits every day, showing Reena what she needs to know to enter Zora for judging at the fair. Mrs. Falala becomes confident that Reena will do well in the judging ring and gives her a show stick, a metal rod that is used to calm and guide the cows during judging. She has used the stick for years and passes it on to Reena in hopes that she will carry on the tradition of showing championship cows.

Luke and Mrs. Falala also develop a special relationship over the summer. He teaches the elderly woman how to draw, something that she has always wanted to learn, but she had always been afraid to try. Luke has always been afraid of getting too physically close to people, but he learns to sit next to Mrs. Falala and quietly draw. What begins as a mutual dislike grows into a friendship and both of them grow personally. Mrs. Falala fulfills a life long dream and Luke learns to be less fearful of getting close to people.

Following Reena's successful first participation at the fair, a sad turn of events threatens to upset the children's new found happiness. Mrs. Falala suddenly passes away and the future of her farm and the animals is uncertain. Although the old woman has left the animals to the children in her will, without a farm of their own, they are unable to provide a home for them. Reena's quick thinking and "give-it-a-try" attitude ensures that Zora and the other farm animals will have loving care for the rest of their lives.

More summaries and resources for teaching or studying Moo: A Novel.