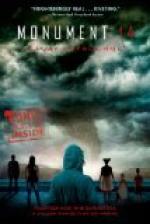 Emmy Laybourne
This Study Guide consists of approximately 24 pages of chapter summaries, quotes, character analysis, themes, and more - everything you need to sharpen your knowledge of Monument 14.

Monument 14 is the debut fiction novel by author Emmy Laybourne. In this novel, Dean Grieber is a sixteen-year-old boy in high school living in Monument, Colorado in 2024. When a megatsunami strikes some of the major cities along the east coast, the megstorm also creates weather phenomenons, such as a major hailstorm that wreaks havoc on Monument.

The hailstorm causes the two different buses that Dean and his brother Alex are riding on to school to crash into each other. When Mrs. Wooly, one of the bus driver, saves the living students from both buses, she drives the school bus into a local Greenway store. When Mrs. Wooly goes for help, the students she leaves behind, ranging from eight years old to high school students, take refuge inside the store.

The hailstorm also knocks out the Network, which is the way residents watch televisions, surf the net, and track each other. The local nuclear chemical plant is alo leaking, which causes nuclear contamination, to which residents are having varying reactions according to their blood types, that range from blistering to turning into raving maniacs that attack and kills people. Over the course of the twelve days, the kids form their own form of a society inside the Greenway. They use the food, housewares, and other goods and supplies inside of the store in order to survive. They learn how to operate as a group, even electing a leader to be in charge until Mrs. Wooly returns with help.

When two adults, Mr. Appleton and Robbie, arrive saying Mrs. Wooly sent them to check on the children, the group learns what is happening in Monument and the world for the first time from first-hand accounts, rather than the news footage that they have been able to pick up on one of the standard televisions left inside the store. When the group learns that they can escape to Alaska if they can make it to the Denver airport, they decide to drive the school bus there. Dean and Astrid, along with Dean's twin neighbors, elect to stay behind in the store because Astrid is pregnant.

More summaries and resources for teaching or studying Monument 14.