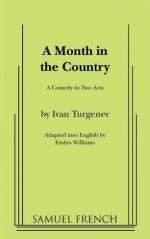 In his time, Nikolai Gogol was known for his unabashed criticism of Russia's bureaucracy. Today he is known as the Father of Russian realism. His short story "The Overcoat" was published in 1840 and reflects the author's skilled use of realism.

Hedda Gabler is another play with a domineering aristocratic female heroine who is looking for happiness from within the confines of a dissatisfying marriage. This play was written by Norwegian Henrik Ibsen and was first published in 1890.

Also a contemplation on what makes a life well lived, Leo Tolstoy's short story "The Death of Ivan Ilych" was first published in 1886. Tolstoy has long been considered one of Russia's finest prose writers and is best known for his novels War and Peace and Anna Karenina.

The French author Gustave Flaubert was a contemporary of Turgenev's. In his novel, Madame Bovary, which...